On Top of Old Baldy

Well, here it is... Thursday, and I get to go to work.  I was off yesterday and the weather was shitty: 3 inches of snow before it turned, first to sleet, and then to freezing rain.  I shoveled the sidewalks and the driveway - my car?  Except for the windshield it's relatively snow free - I'll take care of that this AM.  This is the 2nd day off I've had that the weather was shitty.  This is beginning to turn into a really bad pattern.
And I'm hoping I don't need to deal with any cheapskates today - I had 2 different customers on Tuesday who had serious problems with principles... and ethics.  Both are selling their homes and they're real estate agents advised them both to replace their carpets.  The first was an older woman; she and her husband are moving into a retirement community in the fall.  She's has to put new carpet in the family room leading to the "pool deck" and she wants to go with the cheapest indoor / outdoor carpet we have.  Why?  The new owners "are going to replace it anyway, so I don't see why I should spend more money than I have to."  I wanted to say "Hey, you old bitch, if you didn't put in cheap, shitty carpet they wouldn't have to replace it right away," but I didn't.
They 2nd couple?  They're pond scum.  They, too, are selling their house and they want to replace the carpet, but not the pad because "padding is an added expense."  I always tell people we don't do that, however the idiot associate besides me piped up, saying "on some occasions we do, but we need manager approval."  The customer's husband says "I'll pulled up some of the carpet and the padding's in good shape, so we don't want to replace it."  And, I ask "how old is it."  That's when the customer's wife showed how pathetically stupid they were, "it's about 18 years old," she said, with a smile."  I, and the idiot associate sitting beside me, just looked at them.  Think about it... they've walked around on that carpet and padding for 18 years.  Don't you find that rather reprehensible?  I do.
Anyway, unless you're Internet was down, thanks to a windy day, the whole world got to see how bald the Idiot Jerk in the White House is, and I couldn't help but wonder if Faux News showed that clip.  Probably not.  And now the whole world is laughing at this fool.  What else would expect from a phony?  After seeing it, I started wondering if perhaps he had Stormy Daniels sing "On Top of Old Baldy," now wouldn't that have been a hoot. 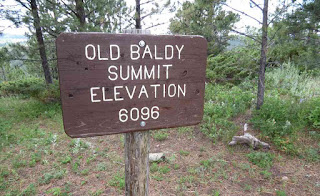