Yesterday the temperature hit 82 (F) around here - hot, humid, muggy as hell, and then showers moved in making it cooler, but still humid and muggy as hell.  Today the temps are forecast to be a more seasonal 46 (F), though right now it's still fairly humid.  Today is also a dumbbell morning... and also my last day of work - 2 days off, then 2 days on, then 2 days off.
The dogs are outside right now, but because of the on again, off again showers, their paws are getting muddy.  This is life.  We all have to deal with a little mud now and then.
Mud is okay, shit is a lot worse.  Like yesterday.  There was a lot of shit happening yesterday.  I understand Marco Rubio was at a Town Hall and things didn't go well for him.  You know who I'm talking about?  The Latino, Republican from Florida who sold his soul to the NRA for Campaign Cash?   Evidently he got booed... not a good thing, and jeered... people yelled things at him... and then when asked if he'd stop taking contributions from the NRA?  Well, he avoided that question.  They're saying he was grilled.  I wonder if he understand that those teenagers, some of whom are already 18, and many who will be turning 18 this year, want gun control and they are going to vote for the person who gives them what they want.  They are not members of that minority group, the NRA, but rather individuals who are learning that their votes count, and they will use them.
And then there was the Idiot Jerk in the White House.  When I heard he had actually suggested to a group of grieving parents and student survivors from Parkland that they were considering arming teachers and administrators in order to keep students safe, I wanted to hit him upside his head with a brick.  This is America.  We should not have to arm teachers and administrators because a minority group, the NRA, has twisted the 2nd Amendment so crazily to the right it now holds sanity contemptible.  Making this ignoble insult even worse, the Idiot Jerk in the White House sat there among these grieving parents, beside these students who had seen their friends shot to death, holding crib notes. 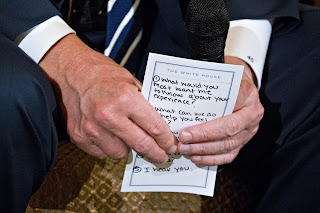 This turd of a human can't even think of appropriate questions to ask.  He needs them written down, no doubt by John Kelly, who most likely said "don't forget to ask these questions, they'll make you look sympathetic."  The time has come to flush this turd.