No work today!  Not scheduled.  I feel odd about that because today is Inventory Day.  All of the management team was at the store bright and early, some at 0500 and some at 0530.  I don't know, perhaps out of sympathy for them, but for some reason I woke up around 0330 - which would have been when I would have gotten up for Inventory.  That's right, I got up early, had some coffee, threw a load of laundry in the washer, and then went back to bed where I slept until 0630 - a sleep in for me.  This is how it goes.
Yesterday I got to hear a stupid customer complaining about how a mistake she made was our fault.  That's right, she was blaming us for her own stupidity.  You see, this woman went online and purchased a Natural Gas range.  She doesn't have Natural Gas, she heats her house with Propane.  She seemed to think they were pretty much the same thing - they're not.  To use a Natural Gas appliance with propane it needs to be converted.  Warnings are fairly prominent in the instruction manual.  Guess what she didn't read?  In fact, she didn't do any research what so ever, just ordered the range online, had it delivered, and had someone who didn't know what they were doing install it for her.  This was 2 months ago.  Since no conversion had been done, and propane burns hotter, her pots and pans began to melt when she used them.  When was the last time you put a pot on your stove and it started to melt?  She had soot in her oven....  I have no idea what she tried to roast, or bake, but finding soot in your oven after wards is not a good sign.  And this was our fault because we sold her a stove that didn't cook with propane.  Remember, this all started 2 months ago.  She turned rather nasty when they told her that this was her responsibility, and as such, we were not going to take back the range she bought and credit her account.  This is a nice definition of stupidity, don't you think?
Oh, and how about the Idiot Jerk in the White House saying he would have run into Parkland?  I guess his comments were once again fodder for the late night comedians.  His approval rating had actually climbed a microscopic bit, but... once again it's begun to go down the shitter.  This is all to be expected, of course.  There was an interesting bit in Bloomberg by John Dean, (the Watergate John Dean for those who are either too young to know).  Dean was the one who pleaded guilty and pretty much ended Nixon's presidency.  He said the Rick Gates' pleading guilty is going to do the same thing to the Idiot Jerk.  I believe most people this to be a foregone conclusion. 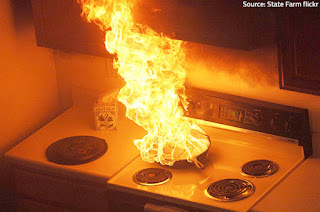