Another Nail in the Coffin

Friday morning... and I'm off today.  The dogs let me sleep in until 0530 - wow! but then they started jumping around on the bed - that was 180 pounds plus of a canine 'good morning.'
I had a $5200 carpet sale go through yesterday from a customer who could easily afford the expense, his shiny, black wingtips sang of 'money.'
Also, measurements came back for a customer and his wife who are buying blinds - so I designed their blinds... basic price came to a little over $2200 for basic blinds.  He hyphenates his last name, which seemed odd for a man, so I Google'd him, evidently he's a prominent bankruptcy attorney so I'm betting they gussy up those blinds a bit.
Since I was up this AM I started watching the opening ceremonies from Pyeongchang.  All of a sudden the stream stopped and I received a message asking me to verify my cable company - I don't have a cable company which ended the 'live stream' from NBC Sports.  My first thought was that this was the result of the Idiot Jerk, and the Republicans, trying to eliminate Net Neutrality; where you need to have a 'service provider' to use the Internet.  I have FIOS, but I don't have cable.  And I'm pretty sure that whole Net Neutrality thing is locked up in the courts.  So this was most likely NBC Sports being stupid.
And what about Wall Street yesterday... oooohhh.  Now it seems as though there are those who have decided that this is a... market correction.  I believe are defined by losses up to and including 10%.  However, if the Market continues to drop - then this is something other than a 'correction.'  Problems abound.  The government is going to have to borrow $1 Trillion to pay for that wonderful Republican Tax Cut.  Lower unemployment leads to higher prices and inflation, which means we need a certain level of unemployment; it also leads to interest rates going up.
And, unfortunately for the majority of Americans, we have a numb nut in the White House, a Jerk who took credit for the Stock Market going up, who now has to deal with the fact that every point the Dow drops means another nail in the Republican Coffin. 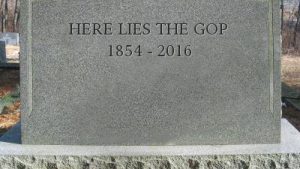 I bet there will be dancing at this wake.