Well, it's Saturday.  Yippee Skippy, I get to go to work!  I am off tomorrow, Super Bowl Sunday.  Whoopee Ding Ding!  Now, I know I should be rooting for the Eagles, since Philly is only about 90 miles away but... well, tomorrow morning the Men's UCI Cyclocross Championships are on live!  That's what I'll be watching.
And yesterday was very exciting, now wasn't it?  The Nune's Memo was released, a bit of fiction which was supposed to be so explosive Americans would be sent reeling by the revelations that the Democrats were so vile, conspiring to foist lie after lie on gullible voters in their attempts to remove the Idiot Jerk from the White House.  Ho... hum.  What really happened was that most people fanned their noses a few times and wondered who 'cut the cheese' in Washington.  Well, that answer is simple enough - those crazy to the right Conservatives, that's who.  When the Idiot Jerk Tweeted out something about how "people should be ashamed," I don't think he realized those may have been the first honest words to come from his mouth in what?  Years?  But then again, I doubt very much if he knew he was talking about Republicans - that's to be expected.  He's not the brightest bulb in the box.
Oh, and the stock market dropped.  Oops.  Checking Bloomberg this morning, it actually tanked by 744 points! Wonder what that did to your 401K.  Looking over the financials this AM, almost every one agrees:  they don't know if it's over yet.  There is the possibility that the Dow may continue to fall in the coming weeks.  Ooops.  How's your 401K... oh, wait, I already said that.  Maybe we should ask the Idiot Jerk in the White House.
Finally, there was a older gentleman in the flooring department yesterday setting up a measure - he was not my customer.  I don't deal with people who don't shower, or shave, or wear bright red baseball caps that read "Make America Great Again."  You have no idea how difficult it was for me to not pull out my phone, open the Bloomberg App, and shove it in his face.  While I would have had much satisfaction, that would have been considered really bad customer service. 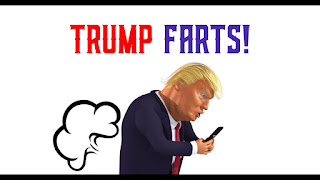 So, all I did was fan my fingers briefly in front of my nose, which is about all you can do till these little farts pass.
Posted by Dave R at 7:53 AM