My, wasn't yesterday interesting?
I got about $1400 in sales at work - they track our sales figures, we don't work on commission, but we still have a weekly sales goal we need to reach.  I did well last week, over $11,000 in sales - they were happy.
Oh, and I understand that Faux News broke into their normal programming to give the Idiot Jerk in the White House a slap in the face.  You know?  About the Stock Market... dropping. At one point it had dropped 1600 points, the most it had ever dropped... ever... in all the recorded history of Wall Street.  According to Bloomberg, there was a period when the trading floor was a virtual 'blood bath.' 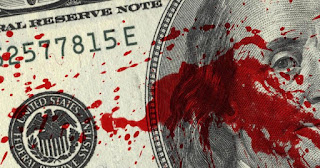 And, from what I've been reading, this is far from over.  But then, this was to be expected.
To complicate things even more... the government runs out of money on Thursday.  The House, of course, is pushing another temporary measure since that's the only thing these losers can do...  which is going to have a negative effect on Wall Street.  Ooops.  They also need to borrow $959 Billion to pay for the wonderful Tax Cut they gave to corporations and to the wealthy.
For those who don't know, the two overriding principles of Republican economics are Greed and Selfishness.  This is why every time they managed to get a majority in both Houses, and an Idiot Jerk in the White House, the economy always ends up going to shit.
Anyway, we'll have to wait until the end of today to see the markets are sitting, if this is a simple correction you should expect them to drop a total of about 10%.
Keep in mind that all of this doom and gloom is even worse for his supporters - just imagine their horror as the 'big bucks' he promised are not going to come rolling in.  Think of all of those ultra-conservative Mom and Pops who dumped their savings into the Stock Market because they believed his lies.  It's a shame that they'll lose so much, but then they shouldn't have been so gullible, shouldn't have let their hatred guide their vote.
Anyway, for the rest of the week I work a day, and then am off a day, work a day, and then am off a day, and next week I'm taking vacation.
I downloaded a nice ride for tomorrow - almost 13 miles long.  I can't wait.  Soon I'm going to start working on hilly rides - can you hear my legs screaming in anticipation?
Oh, and don't check the financial news unless the sight of blood doesn't bother you.
Posted by Dave R at 8:55 AM