The Return of Nick

Yesterday was Good Friday - I don't know how good it actually was, I can tell you we were busy at the Flooring Desk - sales going through, measures being scheduled, and the return of Nick, one of the twins I've been working with as he and his brother rehab a house.  Oh, and I got to meet their mother.  She's making the color decisions for this rehab.  She thinks she's color savvy.  She isn't.
On Thursday Max had come into the store, changed the color of the carpet to something a bit lighter and paid for the installation.  Mom evidently didn't like the color even though it was more neutral than the color Nick had chosen previously.  You see she didn't like the way it looked with the color paint she'd chosen which was what you might call a muddy, steel grey, brown which has the potential for looking very dark.  Standing there in the glaring fluorescent lighting, she chose a color just as muddy, just as steel grey, and darker than the painted sample she was using to make her decision.
Now, as part of the measurement process we have pictures taken of the rooms that are to get new flooring; often we see potential problems homeowners do not.  That room is an upstairs bedroom in a Cape Cod, and has one small window at each end, and after that carpet goes in, and with that color paint on the walls, it's going to look like a cave.  That's not the way you entice potential buyers.
Anyway, I Googled Nick and got a pic - he's below, and he is, unfortunately, his Mom's favorite. 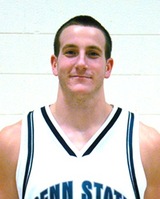 At one point I mentioned that the brother, Max, had taken a pic of the carpet color he'd chosen and sent to both his brother and his Mom for approval and had received no response from either.  He then called Nick on the phone and talked over the change of color and got his 'okay.'  Their Mom said, "well, it just doesn't go with the color of the paint," at which point Nick said that Max was "an idiot."  She said nothing.  And I just kind of smiled as I saw failure written all over this project.  Why is  it that some parents are the worst thing that can happen to their children?