So, I did my 35 minutes on the eliptical this AM and sitting here at the computer scanning the news and sipping on my Gatorade Frost, when Lily began barking from downstairs.  Where as Big Seig will just bark for the hell of it, she usually barks when she wants something.  I found her sitting in front of the sofa with her beaver in her mouth.  That's right, she has a beaver... a toy.  They both do, or did.  Big Seig ate his and then threw it up because fake fur is non-digestible.  Sitting down on the sofa, I reached for the beaver saying "you want to play?"  She took a step away and, looking up at the staircase, barked again.  She wanted to play alright, but not with me, with Big Seig.  Little hussy. 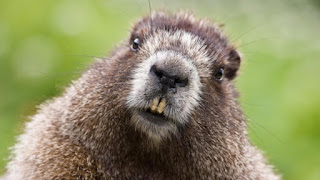 Anyway, during the 1st quarter of this year, the Economy weakened.  And, of course, the Trumpophones are spitting out their sour note excuses, one of which is... 'the weather.'  Isn't it amazing that every time the economy under performs one of the main reasons is always 'the weather.'  They're saying things are going to improve when the "tax cuts" kick in... but there's no guarantee that they're going to kick in.  And when they do?  Well, I don't know a single company out there that's going to say "oh, we just got a nice big tax cut, let's hire some unnecessary labor!"  But then this is always the problem with Conservative Economics.  Isn't funny how these people who want to reduce the size of government, lay people off to cut our expenses, want someone else to hire people to just sit around.  Nobody hires anybody until the demand for labor is actually there.  I have never worked in a place where an associate gave their notice and a new hire was brought in before they were actually gone.  That's wasted payroll hours, you know?  Nobody hires somebody in with the expectation that down the road there's going to be more work.  When I worked for International Paper we took over the billing for the entire Eastern Seaboard and they waited to see how our current staffing would handle the additional invoicing.  It wasn't until we were a month into it that I had to deal with my first interviews.  This is how life is.  A fact Conservatives like to ignore.