Okay, so this is the last of my 5 days off and so far it's the nicest weather wise.  I actually got some yard work completed, mowed the grass (with a rotary push mower), used the weed wacker to wack some weeds.  Earlier I took the dogs to the park - we did the 'nature' hike today and they loved it.
Did I go to the gym?  Nope.  Did I get on the scale?  Nope.  Because the weather has been so bad, today is my 'catch up' day.
Yesterday I went down to York and took my friend Betsy out to eat and to a movie for her birthday.  I'd been pushing for Kong Island, but the times did work, so we ended up seeing.... "Beauty and the Beast."  She has a unique perspective in that she's never seen the animated film... ever.  As she says "back then I didn't go to movies, I had too much other shit going on in my life."  To say she loved it would be an understatement.. except for Emma Watson.  As Betsy put it "she was much better in the Harry Potter films."  Seeing it a 2nd time, I spent much less time comparing the live action to the animated version.  The relationship between Gaston and Le Fou seemed much less... platonic this time through.  And even though the audience laughed in the end when Belle tells the Prince he "may have to grow a beard," I thought to myself, my, there's so many implications is that one little sentence. 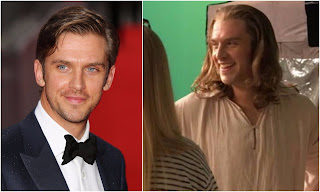 And for those of you who don't know, the Idiot in the White House is coming to Harrisburg this coming Saturday.  That's the same night as the correspondents dinner, which he doesn't want to attend.  It will, I suspect, be one of those hate filled pep rallies just like the ones he had leading up to the election.  Because it's looking as though this is going to be a bad week for him, it wouldn't surprised me if he amped up the hatred.  He's going to need make sure his Trumplodite hoards ignore his mounting failures, and his historically low poll numbers.  Of course, if things go horrendously bad for him this week, people are going to wonder why he focused on a rally rather try and do his job.