He seems to have a lot of them, especially with World Leaders.  Remember Abe, and the handshake from hell?  And yesterday there was the meeting with Merkel where she asked him if he wanted to shake hands he all he did was glower at the floor. 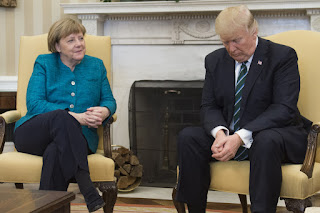 Do you notice how she looks the part of a World Leader, comfortable in the presence of a fool, and he looks the part of a petulant child who's got a scolding, so uncomfortable sitting so close to a... well, World Leader.  Not only a World Leader, a woman who's had multiple meetings with his idol, Vlad Putin.  Makes you wonder if perhaps she told him in private that Putin thinks he's a putz.  Or maybe she said something like 'Du bist ein Dickhead.'
Anyway, it was just one more in a series of awkward meetings, which will most likely continue on a regular basis.
And Tillerson, a man who's as much of a bubble head as the Idiot in Chief, made some sort of veiled threat regarding a preemptive attack on North Korea.  He, himself, seems to have had his own awkward meetings with Leaders in both Japan and South Korea, spending barely an hour with each before scooting over to China.  In private I wouldn't be surprised if the Chinese ask him if it's true that Trump really pays to watch hookers pee... or maybe they'll just show him the video.
Or maybe that's what Merkel brought up.  Maybe she told him that Vlad is showing it to all the World Leaders.  Perhaps she even told him a golden shower joke.
Expect more of these awkward meetings because he is the joke of the world, free or otherwise.