First the legs and now the Abs... and other stuff.

So, I went to see my Mom today, as I do every Wednesday.  I suspect she doesn't have a lot of friends at Graysonview; her personality overrides friendship since her 2 defining characteristics are:  1) she is always right and has no problem telling you you're wrong; 2) above all else, you need to feel sorry for her and therefore cater to her.  Among 95 other seniors, many of whom share these same traits, she tends to keep to herself.  She also suffers from dementia which means that most of her memories are a mish-mash, and time is constantly warping back and forth.  None of this bothers me too much.  There is not a strong bond between she and myself, nor is there much of a connection between her and my brother and sister.  This is how it goes.
Anyway, I was expecting my legs to be sore after spending 30 minutes on the treadmill yesterday, and, they aren't, which is nice.  I did pull out an Ab Workout book which was practically my Bible in my younger days. 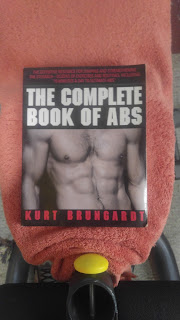 I guess the Idiot in the White House when on some sort of Twitter tirade, no surprise there, blaming conservatives for his recent defeat.  Now isn't that just like a Republican?  Evidently even Dick Cheney the Russkie thing is... well, pretty bad, quite possibly and act of war.  And, of course the GOP really wants this to be gone... well, sorry buddies, it ain't going to happen.
And this just in, Gallup says the Idiot's approval rating is still on the decline.   You know, you would think that simple, common sense would tell the GOP there's a stench emanating from the White House.  Duh, no one ever accused them of having commons sense.  They are a failed party with a failed president... how low will they go?  Who knows?  Just hold you noses and keep back, when this baby goes it's going to be one really, huge, I mean really huge, explosion of shit.