Now, wasn't this past week fun?  Be honest.  I mean, there was a March 4 Trump which was attended by thousands.... that's right thousands... but not in one city.  Trumplodite support couldn't manage thousands in just one city, but they did manage to turn out 40 or 50 here and there.  The Huffington Post had a dose of reality with their report that "Tens of supporters showed up."   To put this into some perspective, GOP Townhalls have been drawing crowds of up to 1000.  Now isn't that 'slap you knee' funny?
And then, of course, there were the Tweets about the wiretapping.  Evidently the Idiot in Chief read something in Breitbart about Obama wiretapping Trump Tower, and Breitbart sourced this article to a "crazy to the right" radio talk show host and published it without any sort of vetting, or verification because it made their blood boil.  And, of course, this article pushed the Idiot in Chief even farther from the path of reality, which is something people really need to pay attention to, this innate ability of his to fixate on the absurd.  Which, of course, brings up the question of his mental competency.  This is a 70 year old fool who relies on ass-kissers to define his reality.  This is about as close to hysterical as you can get. 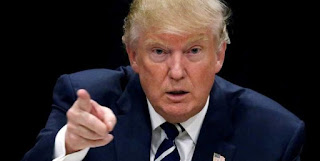 And here's something else to ponder.  If DT is mentally unbalanced, and either removes himself, or is removed by others from his position, what does that do to all of the Executive Orders and the legislation he has signed.  Does his mental illness null and void everything?  These are things we need to think about since rarely a day passes without another small revelation about his instability.  And what does it say about the GOP, this fact that they don't care how crazy he is, just as long as he gives them what they want.  This is all going to play out very badly for both the Idiot and the Republicans.  And that's exceedingly funny.