One of my readers

Crap, yesterday was Whit Monday and I missed it...  Actually, I saw it on my calendar and had to look it up because no one I know seems to give a whit.  Yep, just another faux holiday the growing majority find unimportant.  Now, if companies started making it a paid holiday... wait, that'll never happen because they don't give a whit either.  That would cost money.
I'm reading my way through the paperback copy of The Body in the Tower, so far I've found 10 typos I missed, which will be corrected.  One of the things I thought I'd do with this book is try and take pictures of the readers and cover artist (if they'll let me) and post them here so you can meet them.  A bit of recognition, you know?
This is Patty. 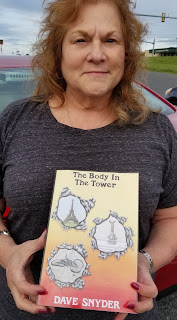 Patty got to read the first draft.  She went through it with a pink highlighter.  Pink is not my favorite color.  There were so many pink 'question marks, her way of saying "what's up here?"  She's the one who said there was too much cycling and not enough story.  She said the cycling bits were... boring.  Shit.  She's also responsible for Bishop Halsey showing up when he does.  For those interested, Patty graduated from the Anne Marie school of artistic linguistics, so things are never just... boring, and it's never just "what's up here."
Anyway, I guess the Idiot Jerk in the White House tried to put some distance between himself and Nixon, another Republican scumbag who got his ass elected.  I've said this once I'll say it again, when all the dirt comes out on the Idiot Jerk, he's going to make Richard Nixon look like an alter boy, and we know what happens to alter boys.
Of all the games introduced at this year's E3, there were only 2 that tickled my fancy.  Cyberpunk 2077 gets released in 2020, but The Outer Worlds is getting released in October.  I already have my pre-order in, because that's only like... oh, 4 months away.  Enjoy the trailer.  Love that rock and roll.

Favorite line so far:  "The board... their lackies... they're all a bunch of swine!"

Email ThisBlogThis!Share to TwitterShare to FacebookShare to Pinterest
Labels: Donald Trump, Patty Vaughn, The Body in the Tower, The Outer Worlds