Painting by the numbers

This is my first day off since last week and so far I've been enjoying it.  For a change the weather has been rather nice and as a result the paint desk has been busy.  These are the times that go fast, unlike the doldrums of winter when no one paints anything.  Of course this means we also get to deal with many more issues, some customers get irate, some demonstrate an ignorance of color, and others fail to grasp the concept of light.  There are those customers who let you explain and then there are those who feel that they need to explain to you, especially when there is a problem.

Now we don't make a lot of money off of the paint we sell, we make money from the attachments, like the roller covers and brushes and drop clothes, etc.  This is why "tinted paint" is non-returnable, we lose money when we take it back.  A good paint associate will qualify the customer in attempt to avoid complaints.  Still, they happen.  Take the couple who showed up at the paint desk on Saturday.  She looked like she'd had some work done in an attempt to maintain her youthful presence, however her work was no long working.  He, in his blue stripped button down shirt, looked as though he'd come straight from the office.  They were returning paint because the color did not co-ordinate with the Honey Brown color of the home's exterior.  One of my very good tenured associates worked with them.  They didn't want him to work with the paint they had already purchased, that just wouldn't do for them.  He could, however, spend 20 minutes going over the numerous colors we can tint in order to find that one, perfect color which would "pop" next to their Honey Gold exterior.  They left the paint desk pleased as punch, with a brand new gallon of paint.  The next day I found it in the Returns Cart. We took a hit because they made a mistake, and of course they didn't really care.  To them it's part of their prerogative; if you don't like it you return it. 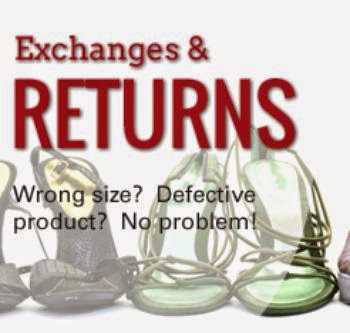 Buying paint is not like buying shoes, but a lot of people don't understand that, in fact it's not like buying most things.  When you buy paint the product is changed in order to meet the customer's preference.  When was the last time you bought a shirt and they put on different buttons because you wanted something else?  Or changed the heel on a pair of shoes because you want to be a little taller?  Have you ever bought a pair of pants, and then went back and asked the clerk to lighten them because they were too dark?  The problem is that people don't want to take responsibility for the decisions they make.  The couple who were trying to co-ordinate to a Honey Gold?  No one held a gun to their head and forced them to pick the color they chose.  In fact, they could have taken paint chips home, or even bought a tester, had they wanted.  That would have been the smart thing to do.  Instead they ended up returning 2 gallons of paint.  I wasn't there when they returned the second, but I wonder if he was wearing a button down, long sleeve shirt.  I don't have to worry about her, there's no way on earth she's going to get rid of her Phantom of the Opera nostrils.