I was reading in the Lancaster newspaper this AM that Franklin & Marshall, a fairly prestigious college in Central Pennsylvania, polled a number of Pennsylvanian voters, Democrat, Independent and Republican, and discovered most of the citizens of the state don't like the current governor, Tom Corbett.  This was true even among Republican voters, Mr. Corbett's own party.  In fact, more then half feel he is unelectable to a second term.  I've known for a long time that a number of the people in this state really don't like the man.  Personally I think he looks like a huckster.  Maybe it's the white hair which looks as though it's been coiffed a bit too tight.  For a number of people, I suspect it's because he was the State Attorney General who chose not to investigate Jerry Sandusky, the sexual predator coach at Penn State, even thought complaints were being filed way back then.  But then Corbett already had his eyes on Harrisburg and the governorship, and Penn State is in the heart of Republican country, and he really wouldn't want to alienate any of those voters now, would he? 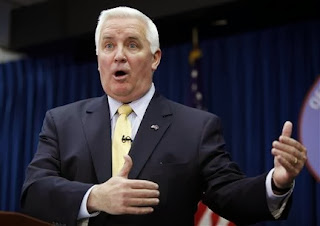 My problem with the guy is his inability to focus on governing the state.  Instead, he and his Republican Congress seem to have made getting Republicans elected their main priority.  I don't believe he understand he was put in office to work for the citizens of the state, not put more Republicans in office.  That's not his job.  He is getting paid to work of the people of Pennsylvania, not surround himself with cronies who are going to "have his back."  It is funny if you really think about it.  Since he was elected, Mr. Corbett and his party appear to have spent more time tailoring the voting laws of the state in order to insure the next President of the United States is Republican then on anything else.  Now this isn't really completely true, he has had several other things on his agenda but very little has come to pass.  Being in control is not enough, you have to do something, other wise you're nothing more then a horse's ass.