Wednesday, and I'm feeling better than yesterday morning.  The congestion was gone by noon.  I'm thinking perhaps it might have been the result of my drywall contractor sanding down the seams in the kitchen.  Since there is dust everywhere, I figure that most likely there was some in my lungs.

Painting in the new laundry room is finished, (except for a few minor touch-up spots on the trim).  The valances are hung.  My deliver is between 7 - 11 AM this morning.  Home Depot lets you track your appliances.  I was the 3rd delivery scheduled, so I'm figuring the washer and the dryer should be here by around 10 AM.  After reading the instruction books thoroughly, I'm hoping to have the first load in by around 1 PM.

The only thing which might slow things down is the rain.  There's a shitload coming up from the south.  Temps are supposed to stay in the high 40s (F) to mid 50s (F).  I'm fine with that.

And what about our American Men's Soccer Team?  We beat Iran!  One of the many reasons this is important is that soccer is not our most favorite sport.  Baseball and football tie for that honor.  Our soccer teams rarely get the time of day from sports enthusiasts, until they beat Iran.  In Europe and the Middle East, football (soccer) is King.  Their fans have been not to riot when the lose.  People have died.  Their teams are considered truly elite.  While we have exceptional players on our teams, none of them is a quarterback, or a tight end, or a receiver.  And we beat Iran.  Let that sink in.  Thank you Chris Pulisic and the entire American Men's Soccer team. 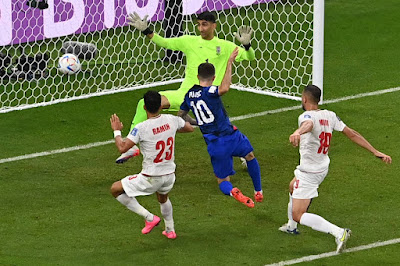 The Senate passed the Defense of Marriage Act yesterday.  This is a good win, but not a great one.  States that do not recognize same sex or interracial couples will have to recognize those marriages if they are performed in a state which allows same sex or interracial marriages.  Eleven Republicans helped pass this groundbreaking bill.  This is a finger in the eye of those Cracker Jack Crazies who desperately want to use their mythology to define America.
Elmer Stuart Rhoades lost yesterday.  As one commenter put it, this was more embarrassing then shooting himself in his own eye.  Guilty of sedition.  A loss for Elmer is a win for America.
And Markie Meadows was another loser yesterday.  The South Carolina Supreme Court has ordered him to testify in front of the Atlanta grand jury investigating Trump's interference in their 2020 General Election.
Everyone of these losses makes Trump a bigger loser.  I don't know about you, but I'm just loving this shit.