Well, according to some people, we have passed the Hump day, Wednesday is now in the past.  I got up extra early this morning, not because I have big plans, rather both dogs decided they needed to go 'potty outside' at 10 minutes of 5.  So, this is getting written a lot earlier, as well.  Keep in mind that even though I am scheduled to work, at this hour I have absolutely no problem in going back to bed for a nice little early morning nap.

I finished painting the trim in the new laundry room yesterday.  The walls are next.  Knowing my penchant for bold colors, I'm, going to shock everyone by going with a pastel.  The room is small.  Painting the walls something shockingly deep would make the space smaller.  Eventually, I will bring that color out into the bathroom.  That won't happen until after I remove a sunflower boarder.

I went to see Wakanda Forever, last evening.  It was good... though I thought a little too long.  Too much emoting over the death of Chadwick Boseman.  The film was very entertaining, though I had pretty ascertained before sitting down how the plot line needed to go.  I would not be remiss in saying Wakanda Forever is about life, and death, and the transitions we all go through after death, how the finality of won life leads to both anger and grief.  For those hating subtitles, be forewarned there are quite a few, however they are in different colors, depending upon the language being spoken. 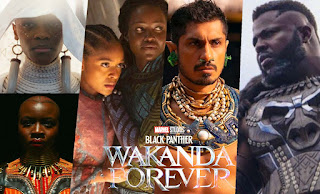 Two things of importance yesterday:  the Republicans took control of the House by a slim margin.  Will they reflect upon the midterms and the red tsunami they were expecting and act accordingly, or will they squander their tiny advantage by being petty is up in the air right now.  I wouldn't be surprised if they end up being petty.  By now, that might be part of their DNA.
The second thing was the Respect for Marriage Act, which, with help of 12 Republican Senators, passed the filibuster hurdle in the Senate.  There will be a second, and final vote, that's almost certain to pass.  A majority of Americans have no problem with this, however, a number of Cracker Jack Crazies are flipping shit burgers over the idea that couples, black, white, and brown, whether male and male, female and female, or male and female will be able to legally decide how they want to share their lives.  This is probably the essence of Freedom of Religion, that your beliefs allow marriage between two individuals no matter what their genders.  Many Evangelicals hate this.  They want America to follow a Christian path that they dictate.  This is a freedom they despise.  It takes away their control.  Thinking minds make choices and they don't want anybody to think, just live a life of rote.  I believe the final vote might be as soon as tomorrow.  At that time, their choke hold on America will be weaker.  That is a very good thing.