I'm always delighted to say "yesterday was a day of accomplishment."  That isn't because I don't normally accomplish much, mostly I think I do.  It just means that the specific goals I've set for myself, have been reached.  Yesterday the ugly, white PVC drain for my new washer was primed.  If it were in my basement, I wouldn't have given it a second thought, but since the new laundry room may at some point in the future again be used as a walk-in closet painting is necessary.

Today, I want to get the first coat of paint on the window.  By this time next week, the trim as well as the walls, will have all been painted.  A decorative film, UV protective of course, will be on the lower window.  The top window will have a valance.  The color palette and the film are all about making the room larger than it is.  The bathroom will be repainted in the same color.

I've decided which washer and drying I'm going to purchase.  They're LG (Life's Good) appliances with a 10 years warranty.  Ten years is a long time.  Who knows where I'll be a decade from now.  The house is paid for, that means it's rent free, of the main benefits of home ownership.  It may end up being home port to which I can always return.

My dahlias are still blooming, as are my roses.  Next week the temps are supposed to climb into the mid-70s.  Even though I haven't had a frost yet, this is Indian Summer.   Maybe. 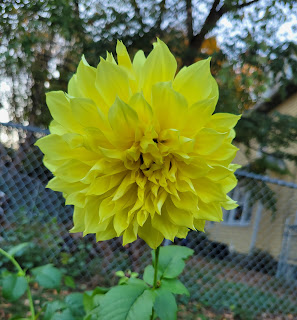 So, Oprah has endorsed John Fetterman.  Not a big Oprah fan, myself, though I will admit she does wield a lot of power.  She has many, many fans.  The fact that she's not endorsing Oz, a quack who was on her show for many years, should not be dismissed lightly.
Five days from the midterms and both parties believe they'll be victorious.  Will there be chaos on November 8?  Do not disregard in the least the anger of election deniers if their party loses.  For them, The Big Lie is everything.  Segments of the Christian population are devolving.  They have become a cult that will have no problem doing what ever Trump asks of them.  January 6 may have only been foreshadowing.  His pundits, Ingraham, Carlson, Hannity, on Fox, have no problem in both inciting and justifying violence.  They do not understand that America will fight back.  People might die.  And for Donald Trump, a MAGAs death demonstrates the greatest loyalty he could ever wish for.