Let the mini-summer begin!  Or, as some call it, Indian Summer since, for the next few days, temps here in Central Pa are going to be in the mid to upper 70s (F).  Unfortunately, starting Wednesday we're going to be back to seasonal weather.  I have no problem with this unseasonably warmth.  A little respite from the heating bills is always nice.  Honestly, I find paying utility expenses such an unfair expenditure of my money, especially since utility companies have decided they want to be major players in American Capitalism.

Take electricity.  I received an email from P. P. & L. my provider, that beginning in December rates for the average family using 1100 kwh per month will increase by about $22.  That's a big jump.  I immediately checked my bill to see how many kwh I use in a month.  As a single person, I use about 550 kwh, so my bill will only increase by around $11.  I like using my air fryer, but that little oven burns up electricity like it's going out of style.  From now on, I'll probably only use it for hamburgers and French fries, foods that only take about 10 minutes to cook.  Everything else will be cooked in my gas oven which is a lot less expensive way to cook.

Here is one of my autumn roses. 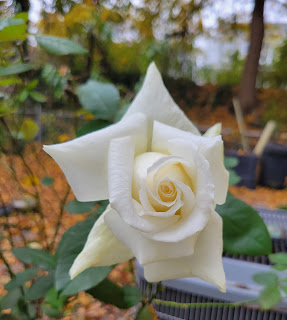 I saw Bibi Netanyahu won the election in Israel by the skin of his teeth.  What a shame.  The country was making some very nice advances in it's approach to the Arab states which surround it.  I don't see that lasting since he's a hardline conservative.  There will be no compromise, a word conservative despise.
Isn't the Elon Musk's Twitter fiasco entertaining?  Instant layoffs, corporate advertising pulling back, people complaining about having to pay to be certified?  That $8 monthly charge is pissing people off.  Verification used to be related to certification, ensuring you were not a bot.  Now, if you've read what the Chief Fool has said, it's totally dependent on your paying the fee, meaning everyone who pays will be verified.  I suspect that's really what's pissing off the advertisers; Subway doesn't want it's ads sandwiched between Tweets of raging racism and hatred.  The Chief Fool doesn't understand this.  Only the foolish will pay that fee.  Everyone else will move to another platform.  There is a good possibility Twitter will become a lot like the fiscally underperforming Truth Social, catering mostly to hate mongers.  Note to the Chief Fool, hate mongers rarely click on ads, they're too busy foaming at the mouth.