Yesterday was nice and quiet.  The dogs and I had cake and ice cream.  Dinner was chicken marsala, (I've been eating that a lot here lately), and desert was a homemade pecan pie.  I told my Dr. this and he replied, "that's fine, it's your birthday, but you really need to lose 13 pounds before you next visit."  That's in 6 months.  That's right, I'm at that age where I visit my Primary Care Physician every 6 months.  Do not worry, you, too, will hit that age.

While at the VA, I also got my Covid booster and my flu shot.  Chatting with the nurse as I waited for my injection, I asked if the Covid boosters would ever go away.  She told me no, they and flu shots are here to stay.  I have no problem with that.  I don't know about you, but I would rather have microchips swirling around in my blood stream then spend time in a hospital. (That's a bit of a joke for those who don't know my sense of humor).  This morning, my Covid shoulder is sore, my flu shoulder is not.

And here's a not too subtle reminder of what happened yesterday. 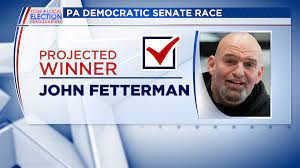 He won by 3% of the vote, not bad. and Ozzie's loss is an embarrassment for the Orange Anus.  I mean, how many times was that moral degenerate in PA to promote his bad decision?  3 or 4?  I believe it was 4.  And this projection was made without all of the mail-in ballots being counted.  There's a huge possibility that 3% might actually hit 4%.  That's a big defeat for the Quack from NJ.
Even though Vance did win in Ohio, last night was a serious smack in the face for the Republican party.  They kept repeating constantly how it was traditional for the party which wins the presidency to lose badly in the midterms.  Those dumbasses were counting on the Red Wave.  I don't doubt for a second that the ultra conservative Supreme Court overturned Roe v Wade because of they anticipated Republicans taking control of the House and Senate.  Yesterday's results mean they pretty much shit in their pants.
In fact, Trump, himself, is pretty much in the shitter.  He had planned on riding that anticipated red wave into a presidential nomination.  Ouch.  While some of his endorsements did win (Vance), many big name endorsements did not (Oz).  Amusingly, I saw where Lara Trump Tweeted some sort of shit that now was the perfect time for Trump to return without understanding he is one of the main reasons the red wave spluttered.
The base the Republican party counted on to come through for them failed.  This creates a big problem for the party.  If they do take control of the House and fritter away their wins by focusing on phony horseshit like Hunter Biden's laptop simply to satisfy that tiny base, they'll be shooting themselves in the foot.  Will they?  Watch out for the blood splatters.