Well Hello Wednesday!  Today is the Sunday for my mid-week weekend.  Schedules will get posted today.  Can you feel the excitement?  Probably not.  If you're in Central PA, that's most likely because you're still in shock from yesterdays snowfall.  It started off in, as my PA Dutch grandmother would say, in the forenoon with sleet.  Then we had drizzle and schlizzle until around 4:30 PM, and then the big flakes began to fall.  Large, at first, the size of a ping pong ball smashed by a careless foot, and super slushy.  When I let the dogs out around 9 PM, we had about an inch of mush.  This morning, temps are warmer and it's doing what snow should do: melt. 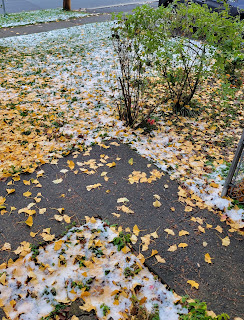 Crap, my Garmin Connect is no long importing my weight from my Withing's scale.  That's a pisser.  And my Senso earbuds Bluetooth is no longer working.  Both are old.  My weight I can manually enter and the Senso earbuds may end up in the trash since I have a pair of nice Jabra earbuds to take their place.
15,000 people have not been sentenced to death in Iran.  This is from NBC News, if you don't believe them, there are other reputable news sites (BBC, Le Monde, NYT) reporting this.
And, joy of joys, Donald Trump announced his candidacy for president in 2024.  Joy of Joys, you ask?  Because this bitter loser is going to destroy the Republican Party.  Al Jazeera has a nice take on his bid, they suggest he will take his party to the brink.   I understand CNN was the only media outlet to carry the entire length of his speech live.  That shows you how far CNN has fallen.  The Guardian says the only reason he's running is to try and stay out of jail.  Even Fox news cut away for their' 'journalists' to discuss his announcement.  The Murdoch news organizations have already switched their loyalty to DeSantis.  The problem with the GOP is that Donnie, the Orange Anus, has a large MAGA following, probably about 2/3 of the Republican Party who will lavish every turd of untruth he spits out with praise, before the swallow them whole.  And a large majority of Americans, around 64% are saying "what the fuck."  Prepare for a vicious (and bloody) Republican civil war.  This is going to get good.