Today is most likely the last day we will be having warm temps; 64 (F) outside as I type.  That's almost balmy.  Predictions are for us to hit a high of 75 (F) today.  Then the mercury is supposed to drop, cratering to a low of 33 (F) overnight.  It will be much cooler tomorrow, so if you're one of those standing in line to cast your vote, make sure you bundle up.

Yesterday was terribly slow at work.  On a Sunday afternoon and early evening, you know televised football is cutting down the shoppers. The weather was warm, mid 70s (F) when I left work, so rather than shop, people did things outside.  Black Friday is coming up, and even though we have a lot of pre-Black Friday deals, people will wait for what they think is going to be a better sale, (remember when I said that great sale will end?).  And then there are the price increases.  Not so noticeable on the big ticket items, it's the smaller priced items where the higher prices are more apparent.  Corporate wants to hit it's fiscal goal and to do that they will raise the cost of a drill, or screws, or paint brush.  While during the pandemic we were considered an 'essential' business, in truth, for most people, the products we sell are not essential.  No one's life is going to depend upon whether they paint their living room sage green, or lollipop lavender.

I do have leaves.  They're sill falling like rain. 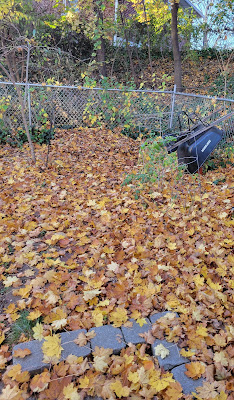 After tomorrow, the election ads will be put to rest.  Lucky me, I don't watch TV so the only time I see them is when I watch something on YouTube (one of those services I'm not paying a subscription for).  I suspect one political party is not going to be very happy.  Lawsuits are already being filed, and not by Democrats.  The last I checked, over 41 million Americans have voted, either by mail, or through early voting.  Many Republicans have this innate belief that such voting benefits the Democrats.  While this is true in some instances, if you start poring over the data, you find that quite a few Republicans also take advantage of both.  When Republicans lose, they point their crooked, little fingers at early voting and mail-in ballots as corrupt and filled with fraud, and so they file lawsuits pushing these lies.  The truth is conservatives are just terrible losers.  To lose, means that a majority reject their beliefs, that a large number of voters have said they don't like the conservative message.  This is something the losers reject, because in their minds they can never be wrong.