So, the temps are supposed to climb into the mid 70s (F) today.  And no, this is not Indian Summer, for those who are so hotly anticipating that warm spell.  As I've said before, we haven't had one of those fall heat waves in quite a few years.

Yesterday was rather meh.  Some things were accomplished, others were not.  A little sanding and spackling in the soon to be new laundry room.  I did a little work on the window.  It's old and is one of the few windows in the house that has yet to be replaced.  I'm putting a decorative film on the bottom half, the upper window will get a valance.  We sell decorative films, but they're a bit too salty for my taste.  Rather than spend $35, I forked out $12 for one I found on Amazon.

And I do get to go into work today.  It will be interesting to see how many more changes have been done to the flooring department.

As some of you know, I've been trying to start selling my books through Barnes & Noble.  There has been a major problem with my W9.  No matter how many times I've submitted it, their customer service kept coming back and telling me that it wasn't signed.  Yesterday, one of their customer service reps finally specified that they required a hand written signature rather than a typed signature submitted on a PDF.  So, I duly sent them information on the legality of typed signatures on PDF files downloaded from the Federal Government.  Their response:  We require a handwritten signature.  As you might be able to tell, I'm a little miffed.

Yesterday I took a pic of my fall dahlias.  Here it is. 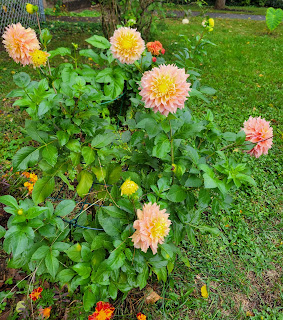 Did anybody watch the Warnock / Walker debate last evening?  I don't watch debates.  No patience.  I have seen a few clips from last nights head to head.  Walker flashing his badge is one of reasons I avoid debates,  Let me be perfectly honest, I laughed loudly.  Another clip I laughed at was when Ralph Reed, a hard right Cracker Jack Crazy from the 90s tried to give his opinion of Walker and the only thing reporters were asking about was that badge.  Ralph got more than a little frustrated.  That was funny as hell.