Saturday.  The temps are supposed to climb into the upper 60s (F) today.  I also get to work.  Will the store be busy?  No idea.  Could be.  Might be slow, too.  We're heading into November and that means a certain shopper's holiday is approaching.  We do have a promotion going on right now.  10% off our installed carpets and it's nationwide.  I suspect this is because we're not making our forecasted plan.  Common sense says that if you don't raise your prices to hit that forecast, you might not have to run a promotion.  Between you and me, unless you're buying $10,000 worth of carpet, your not saving that much.

The electrician was here yesterday and I have a quote.  Pricy.  Running the new line for the dryer hookup, fishing it through the walls from the basement to the 2nd floor laundry room is $1631.  That's actually less than I was expecting.  Adding an outlet using a dedicated line is another $600.  I'm going to add that line in because my house is wired poorly.  You have to remember.  Electricity in Enola arrived after the house was built in 1905.  Right now my living room and bedroom are on one line.  The rest of the house, in its entirety, is on another line.  They put in a big circuit breaker when the Central A/C was installed and right now only 1/3 of the circuits are being used.  That's going to change.

I made chicken marsala.  It was very tasty! 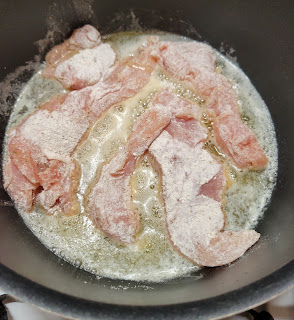 So, I spent a good bit of time yesterday morning unsubscribing to quite of candidates sending me emails in the donor beg tsunami.  While I haven't been keeping track of them, I'm certain I've received requests for cash from candidates in every state in the country.  I do give to certain candidates, Fetterman for one, but my bank account isn't rich enough to send $7 to every Democratic candidate who needs it.  I did the same thing during the last election since it was not unusual to open my email and find 40 - 50 requests.  And I suspect it's worse from Republicans.  The secretary at Erie Insurance told me she gets 8 - 10 phone calls daily from her personal friend, Donald Trump asking her to help him line his bank account.

As I've said before, I get a feed from Newsweek.  They are a failing, conservative periodical for those who don't know.  Anyway, they posted an article yesterday saying that Oz was predicted to win PA per a poll from Real Clear Politics.  For those who don't know, Real Clear Politics does not do polls, they are basically a clearinghouse for polls.  Click on that link and you'll find the results from polls by Monmouth, (very conservative results based), and Emerson (also fairly conservative).  Unless the readers of Newsweek actually checked for themselves they would never know that Newsweek was feeding them disinformation.  Polls, themselves, are seriously flawed, their data usually invalidated because people lie.  Voters beware of polls.