Well, it's Monday, and while I do have to work this afternoon, it will only be for 6 hours.  After that, I'll be off until Saturday, where I once again work for 6 hours.

On Thursday our appliances go on sale.  As a reminder, this will be the biggest and bestest appliance sale of the year, if you need to pick up a new washer, or dryer (like me), or a refrigerator for that matter.  Even chest freezers will be on sale.  Not flooring, though.  That's what I tell people when they stop by the flooring desk and ask what our Black Friday special is.  I politely tell them that they need to stop by appliances and buy that LG dishwasher they're been eyeing.

Something I've noticed lately when I take my slow runs, YouTube has buffering problems.  A small rectangular box pops up in the lower left hand corner that asks if I'm having issues.  This never happens on any of my other laptops, tablets, on my gaming PC. Yesterday, I clicked on it and got a display showing internet issues in Cumberland county.  I've high speed internet, so I really shouldn't be having a problem.  However, that little laptop runs on Windows 11, everything else is Google (or whatever it calls itself now), and YouTube, I believe, is owned by... Google.  Coincidence?

And I did bake a pumpkin pie yesterday.  I used a spring-form pan rather than a regular pie pan.  That was a mistake.  The sides do not hold.  Of course, that doesn't stop it from being tasty.  My, my, my, it sure is that!  Here's what pie prep looked like. 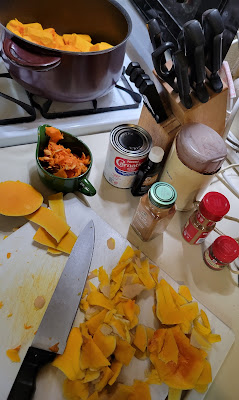 Election day is soon to be upon us.  From everything I've seen so far, early voting is heavy!  That's good for Democrats.  Mail in ballots are heavy to, and again, that bodes well for Democrats.  In Pennsylvania, over 777 thousand have been received. Republicans hate this shit.   We just might hit the million vote mark.  The issue in PA is that they will not start counting the ballots until 7 PM on November 8.  Our Republican controlled legislature could have changed that, but they chose not to, most likely because they didn't want disheartening news leaking out.  This means that on election day the people in this state will have to wait to get the complete results.  While I have no problem with that, you know that when blue votes start stacking up higher than red votes, the Republicans are going to shriek voter fraud.
Posted by Dave R at 7:39 AM