Well, it's one of those early mornings for me.  Awake around 0415.  Crap.  I'll probably take a quick nap before leaving for work.  Thursdays, you know?  Permanently on my work schedule until I decide otherwise.

Biggie went to the Vet yesterday for his blood work.  $165.  This is, supposedly, to ensure his doggy nsaid is not doing any harm to his liver.  One thing that his changing is how much gabapentin he's getting.  You see, his prescription ran out and they refused to give him a refill until after this bloodwork.  To my surprise, there was no significant change in what I interpret to be his level of pain.  None at all.  So I'm wondering if my concern for him fogged up my perception to the point where I was seeing serious suffering where there wasn't any.  I did get it refilled, but now that he's weened off, I'm going to take a wait and see attitude.

The cuckoo clock is on the wall.  It's loud, but not in a bad way.

People ask me what I did when I got out of the Navy.  Well, I went to college, grew my hair long, and one summer I got a job at a summer camp where I got to drive around on a large riding lawn mower.  It was over this summer that I made my stage debut in a community theater production of How To Succeed in Business. 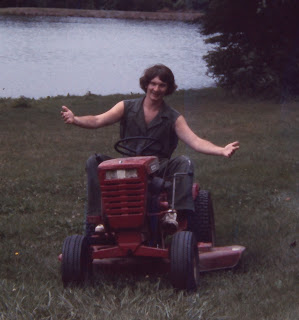 And what about Herschel and his 2nd abortion?  Can anyone tell me why this is not surprising?  I'm suspecting there are more, not that his rattled brain remembers them.
One funny thing I saw on Twitter yesterday was Ronna McDaniel complaining that there were over one million ballots mailed in prior to Fetterman's debate.  She was rather livid, and all I could do was laugh.  Does anyone really believe that those voting for Fetterman are suddenly going to switch over to Oz?  Honestly, the number of complaints about Oz and his statement about women checking with their local politicians prior to getting an abortion far outweighed those against Fetterman and his stroke.
There was also a lot of commentary about Alito's whine that the leak was responsible for members of the Supreme Court getting death threats.  This man is really stupid if he believes it was the leak.  What kind of reaction did he think they were going to get?  Oh, wait, that's right, he's a conservative and we all know that they rarely think.