So what is Tuesday going to bring?  Well, first of all, the weather outside is in the mid 50s, but it's also drizzly.  In about 2 hours I'm going top be sitting at Faulkner Subaru waiting for my car to be inspected.  My total cost will be $136, plus applicable taxes, because I live in one of a handful of counties in PA that requires an emission inspection as well.   I'm estimating that should run about an hour and 15 minutes.

After that, I'm heading down to that Fish Place / Pet Place, as it's now known.  I'm thinking of getting two pelecsos, one for each tank to help with the algae growth.  I also like to buy my fish food in bulk.

Early yesterday evening, I emailed the deposits for the electrical work.  I'm hoping they'll get to it next week.  Unlike the plumbing, it should only take a few hours.  Our big appliance sale starts on November 3.  I'll wait a bit.  It runs up until the after Black Friday.  If you need to buy an appliance, that will be the time since the sales are national.  I was told I could get both the washer and dryer in apple red, or forest green, as well as the charcoal, black, and in white.  I'll go with the white, especially since they are now going to be stacked.  The new laundry room was a walk in closet.  Dark walls make a room look smaller, so will dark appliances.

I bought a cuckoo clock, imported from Germany. 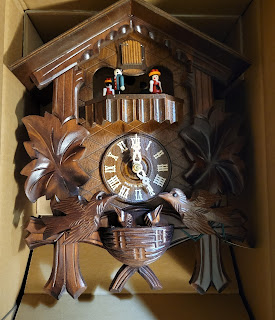 So, Rishi Sunak is going to be the next Prime Minister for Britain.  He's extremely wealthy.  This is not a good thing.  Wealthy people in power always push to help other wealthy people, the common man is irrelevant, in fact they often see a mere nod in the direction of the poor as an example of being beneficent.
For those who have an interest in tracking mail-in ballots, NBC has this nice little graphic show the info they have so far.  This is a nice little graphic. one you may want to save and look at as we approach election day.  An interesting note, over 39 million mail in ballots have been requested by voters, Democrat, Republican, and Independent.  And, if you're like me and do vote by mail, make sure you check to make sure your ballot has been received.  Do not under estimate how much of a nail-biter this election is going to be, so fasten your seat belts.