A busy Friday morning is scheduled.  At 0745, the electrician will arrive (*have arrived, depending upon when you're reading this) to build a quote the dryer hookup on the 2nd floor.  At 1000, the insurance adjuster* will show up at my front door to look at the holes in my kitchen ceiling.  Using the Internet, I tried to get a rough estimate on the drywall expense.  I have a nice sized kitchen 9.5' x 15' (easily big enough for a table and chairs), so using the calculations I found on line the cost should run anywhere between $1000 - $2000.  Now, how's that for bad accuracy?

Even though we've been having freeze warnings for the past 3 days, night time temps have only bottomed out in the mid 30s.  That damages my dahlias, but doesn't quite kill them.

I received an email from Barnes & Noble yesterday informing me that they had (finally) accepted my W9.  So, what does this mean?  Starting in January,  those who don't like buying things from Amazon, or prefer their Nook to their Kindle, can buy my books.  They will be loaded in sequence, starting with The Body on the Lawn.  Why January?  Because the first couple were available at something called Kindle Unlimited, where you earn meager cents for every page read, rather than royalties from book sales.

Here's a pic of Biggie sleeping on the sofa in the writing room.  I try and keep it covered with a muslin drop cloth because the pillows sewn into the back were not made to endure the constant weight of big dog paws. 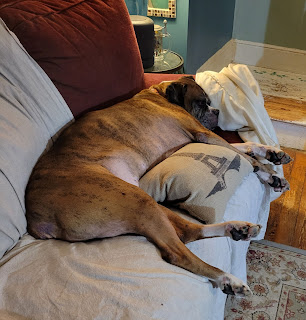 And what about lettuce outlasting Liz Truss.  I cannot thing of anything more humiliating to the Tories than that comparison.  Even more embarrassing is to have a picture of lettuce beamed onto parliament.  Conservatives around the world are flummoxed.  For them, the solution to every economic problem is Tax Cuts to either corporations or to the wealthy.  Such dumbasses.  Trickle down always fails. 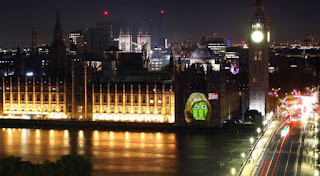 And for those keeping score, Lindsey Graham has lost another appeal to keep from testifying in the investigation into Trump's meddling in the Georgia elections.  Jeez, this guy loses more than Trump.
Finally, more and more I'm seeing that Republicans might hold onto the House.  Voters are buying into their propaganda about crime and the economy.  About crime?  This is a party that wants to be tough on crime yet refuses to do anything about gun control.  Nothing more than empty words.  Ad for the economy?  The entire world is reeling with inflation, not just the United States.  Nothing is going to change that.  Voters who believe the Republicans can solve that problem need to come back into the real world.  Things will probably get worse before they get better.  Well, this is life.  The best way to deal with it is vote Blue.  Save Democracy.  Save America.  Don't vote for lettuce.