Here in Central PA, temps climbed into the low 90s (F) yesterday.  The forecast is the same for today.  And, whereas Tuesday, Wednesday, and Thursday had been very productive, yesterday turned out to be not so much.  I laid around, sometimes passing the hours by watching obscure YouTube videos.  What a waste of time.

Lily had her cake and ice cream.  Loved it.  Boxers are considered big dogs, not large dogs, except for Biggie whose weight puts him in the large category.  Being a nine-year-old big dog, Lily is now officially a senior citizen.  I've just started her on 150 mg of Carprofen to help whatever minor discomfort she might have.  Jumping off the bed can be an issue for her, depending on how she lands.  The stairs, not so much of one, yet.  And as she gets older, I will probably spoil her more than she already is.  Here's a pic of her bowl of cake and ice cream. 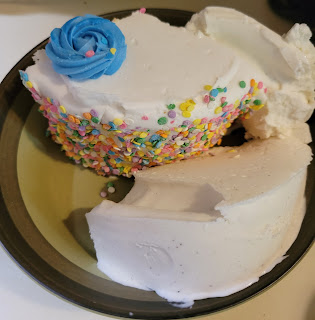 As I was leaving my local Giant supermarket yesterday, my sister called to ask if I had any skeletons in my closet.  Well, not that I know of, so I told her so, and she began to laugh.  It seems as though the police arrest a local man for buying body parts.  Now, when I mean local, I don't mean Harrisburg, I mean Enola, my town.  Son of a bitch!.  Local means 4 blocks away.  Damn!  He bought them from a woman who'd stolen them from the University of Alabama in order to sell them locally.  Holy Shit!  Local police are working in conjunction with the FBI.
I saw where Lindsey Graham lost another appeal.  All of his appeals make him look just as guilty as if he'd simply gone and used the 5th amendment several hundred times.  Might now be a good time for us to start reaching for our canes and parasols?
And, what about that Billy Barr memo?  Evidently both he and Mueller came to the conclusion that a sitting president couldn't be indicted and so what they released was heavily redacted.  It was sort of like "hey, we can't arrest him because he's president, so let's not tell America how much he relied on Russia to get elected, and how much he, and the Russians, obstructed this investigation."  I suspect that when the unredacted version is released, it will almost be like a jolly holiday with Mary.