We have about a 55% chance of rain today.  That's okay.  I work 6.5 hours.  That means I get a lunch break.  Lunch will be leftover beef stew.  I made some yesterday at the same time I was baking an olive oil spice cake.  Tasty stuff.  I like spice cakes.  I added walnuts because... well, I like nuts, too.  I like olive oil cakes, too; their moistness is incomparable, though I'm thinking of adjusting the recipe, cutting back on the oil, at least for one cake to see what happens. 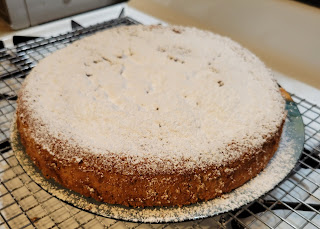 However, I must admit that other than baking the cake, I spent most of yesterday as a slug, checking out the news, watching random YouTube videos, napping on and off.
After over 100 hours, I've pretty much had it with Elden Ring.  While the game was fun, there were issues.  In most games increased experience is what lets you 'level up' (as Bastille sings in Distorted Light Beam).  In Elden Ring you level up by gaining runes, which you get by killing enemies, selling gear, or cheating.  I'm at level 88. To level up I need over 46,000 runes.  To get that many, I have to grind my way through areas I've already completed to slowly increase the number of runes I have, as a result some players have discovered ways to farm runes.  There are also ways to cheat.  Players put out videos on YouTube as tutorials: one guy, who was at level 731, cheated.  I have no patience for cheaters.  If they cheat in a video game, they'll cheat in life.
And what about Alex Jones' $45 + fine?  He thought he could cheat his way out of paying anything by having his company declare bankruptcy.  However, the fine is being levied against him, not his company.  And there are 2 more settlement cases waiting for him up in Connecticut.
And, finally, the Biden Administration is going to pass some major legislation this weekend, and it turns out most of the country approves.  Gas prices are going down, and approval for Democrats is going up.  This does not mean that the MAGA base is no longer a jellified cluster fuck, just that a majority of Americans is realizing that their extremism needs to be permanently checked.