Another lazy Sunday has arrived.  Since I'm scheduled to work, however, I can't just laze around.  For about 7 hours I will be at the Flooring desk.   Sunday afternoons are usually slow.  Luckily, I'm not scheduled to work alone so conversation will help pass the time.  Most of the college kids who work the summer have gone back to school, meaning staffing is bad.  Payroll accounting dictates you don't begin to hire any replacements until they are gone.  Paying a seasoned associate and a trainee to do the same job is bad business.  Supposedly, they have hired an PM associate for flooring, but until I actually see someone, I'm going to bridle my anticipation.  Oh, and if anyone is wondering, the Haitian has moved on.  An interesting thing about him:  his last name was Jules, and one of the recurring characters in my books is a Frenchman named Jules Laurent, so when I was talking to him, I was having a conversation with Jules.

My high school graduating class had a mini reunion on Friday evening.  I didn't go.  I say mini because my class was 286 strong and only about 17 showed up.  Whomever is in charge is either not communicating well enough, or there's simply not enough interest.  I'm betting it's the interest.  While I wouldn't mind meeting up with some of my class members again, my life has moved on so much from high school.  There are not a lot of cherished memories, perhaps because I never truly fit in.  Not that I wasn't involved in a lot of extracurricular activities.  I was.  The Drama Club, the Spanish Club, the Bowling Club, the Astronomy Club, a member of the Yearbook Staff, I was one of those who wrote the cute, little captions that went with the pictures, and the blurbs that went besides every Senior's picture.  The activities were fun, but none were gamechangers for my life.

Today's picture comes from when I was in Paris.  Notre Dame, pre burn, of course.  What you can't see are the small group of young men who were standing to my right.  They were taking pictures, too, holding each other upside down.  You know, that's what you do when you're young and in Paris, hold your friend upside down so his feet are pointing up in the air and have your picture taken in front of Notre Dame. 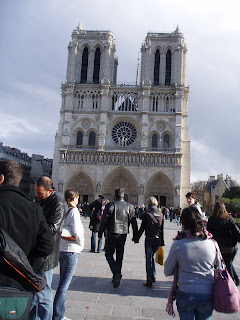 And finally, can we talk about Republican financing?  Everyone was stunned when the RRSC began pulling funds from Senate candidates.  Now we know they burned through... oh, let's just say $140 million to be kind.  They're accounting looks sketchy.  Some of them are eyeing Rick Scott, whose Health Care group was found guilty of Medicare fraud and fined millions.  Now, heading into the midterms, the Republicans are finding themselves desperate for cash and the only ones they can turn to are their MAGA base.  That's right, the same ones they've been bleeding dry for almost 6 years.  Unfortunately for the GOP, they're in competition for those $$$ with Trump.  Every other day he seems to be starting a new "Save My Ass" fund, and that's who the MAGA $$ are flowing to.  He's helping to kill their party.
Oh, and he's evidently going to be in Wilkes-Barre on September 3 to help Mastriano and Oz.  Wouldn't it be nice if he was indicted by then?