Say hello to Thursday in the mid-state.  That's what we call Central PA around here, of course every state has a mid-state as well as a north and a south.  I'm curious as to what happens in one of the north or south states when something happens in the north, or south.  Do they say north, North Carolina or south, South Dakota?

Yesterday was a good day.  Much was accomplished.  It was also the anniversary of the Vesuvius eruption which destroyed Pompeii and Herculaneum.  One of the media outlets, perhaps it was ABC had a headline about the eruption saying 20,000 people had perished.  That number is not correct.  As soon as the ash started falling people began to leave.  They were not stupid.  They didn't huddle in their houses in fear.  They left.  Most people today don't know that there was a Plinian eruption prior to the pyroclastic flows (6 altogether) which lasted almost 20 hours and buried the city in almost 9 feet of ash.  There were only around 2000 people left by the time the actual eruption happened.  Being buried in ash is why the city is so well preserved.

On my treadmill, I'm over halfway through a 5 hour walk of Pompeii.  Funny thing:  At first the tour guide mentioned phallic symbols as being prevalent, then he called them members, now he just zooms the camera in so you can see them... all of them.  There are Penises everywhere.  This is a picture of a bakery; I did not take a picture of a penis.  Many of the ovens had a penis in the brickwork above them.  Scholars believe the Pompeiians thought the penis was good luck. 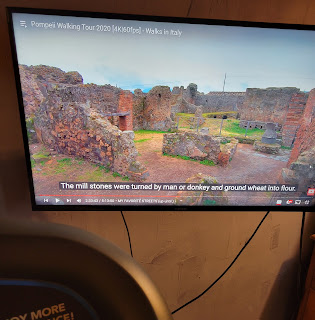 Of course, Biden signed an Executive Order yesterday on student loan debt.  Republicans went through the roof.  The smart ones know this move was pure politics.  Mitch McConnell may have been the only one to point this out.  He's a selfish, lying sack of shit, but he isn't stupid.  75 days from the midterm elections?  How could you not think otherwise.  As for the debt forgiveness part of the order?  It may come to pass, if it ever overcomes all of the legal challenges that are going to be thrown up against it.

And, not too surprising, Trump's amateur hour attorneys had their second attempt to file their silly lawsuit thrown out again because they don't know what they're doing.  The judge actually told them where to find an example they can follow in order to try and get it right.

Finally, from Newsweek, the documentarian who testified before the January 6 committee had a little Q & A on reddit.  Things we learned:  he can barely stomach Trump.  Eric's terrified of Donnie Jr.  Donnie Jr and Ivanka are just like their old man.  Trump is obsessed with his appearance and always wears a lot of makeup.