Good Gosh!  It's Wednesday.  If you're in a 5-day work week that began on Monday, this is your Hump Day.  However, if you're semi-retired like me, or are fully retired, or just don't have to work, then tomorrow, Thursday, is your Hump Day.  Because of the schedule I've set up for myself, I will always work on my Hump Day.

Yesterday morning, as I went to start the coffee brewing, I saw mouse droppings behind the coffee maker.  That's means it's time to set the traps again.

I called a made an appointment for Biggie at the $$$ Vet yesterday.  He still has his cough, but it's not nearly as bad as it was, still, he needs to get a shot or two so I figured he might as well get checked out.  Because he's a dog, and he has a cough, they're treating this as if it were Kennel Cough.  This means I need to call them when I arrive, and they'll let me know when an examination room is ready.  You can bet there's going to be $$$ in that wait.

As I was preparing to suck the dust bunnies from under my futon, I snapped this picture of Lilly with her own bunny. 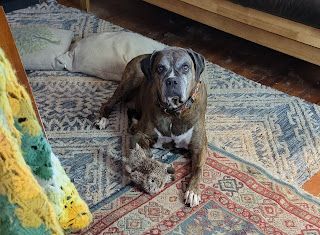 And being that today is a Wednesday during primary season, it goes to figure that there were elections on Tuesday.  As every person with a sound mind should have expected, the Cracker Jack Crazies failed.  From New York down to Florida, there was failure, except for Matty Gaetz.  Of course, Republicans are always going to go with pervy with the weird hair who likes sleeping with very, very young girls women.  Loony Laura Loomer lost by a decent % and she's wailing about voter fraud.  Expect this. These people will never concede since that would make them look like losers in the eyes of their savior Donald J.
What is considered a bellwether special election, Democrat Pat Ryan won in a district that leans Republican.  He ran on abortion rights.  Fellow Democrats take note, the Republicans shit in their pants on this one.  The time has come to hold their noses to the grindstone and make them pay.
Oh, and prepare yourselves, there will be some interesting news coming from the Trump camp today.  You see, his desperate ploy to sue the United States was kicked back by a judge he put in place because there were sooooo many mistakes.  And that judge?  She's a little pissed at him for filing in her district because he thought she'd be a pushover.  Anyway, his team of inexperienced attorneys has until today to refile correctly.
And finally, I saw this bit in the Washington Post about Herschel saying his campaign was genius.  I found it worth a chortle, or two, or three.