I don't know about you, but I'm grew up thinking the week actually ended on Sunday.  You know?  Having to work for 6 days before reaching that 7th day of rest.  Think about that for a second.  We were never supposed to have 2 days off in a row.  Never.  Only 1.  And even then, Sunday was never supposed to be anything like Funday.

Anyway, Lily had to go potty outside around 0100 because she doesn't go before climbing the stairs and jumping on the bed.  As she was outside doing her late-night business, I checked the traps.  Success.  One mouse down.

Yesterday, work was meh.  I had a young couple who'd had a measure done for laminate flooring.  The estimate came back much higher than they were expecting, mostly because they didn't have proper dimensions, so the estimate was off.  They will some of the last customers to get an estimate.  We are using a new procedure called SAM that no longer gives an estimate.  Believe me.  Estimates are almost always off.  Sometimes big time.

One of the main reasons I'm on Facebook is the USS Constellation page.  Pictures get posted which help people understand what life was like on an aircraft carrier.  Here's a berthing compartment similar to the one for Division 90, CIC (Radar), the only difference being we had a green floor and green curtains.  This was taken when we were in port.  At sea, the overhead lighting was red. 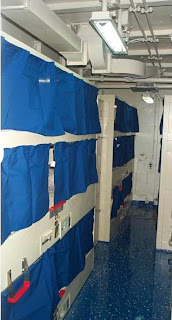 And here's the hanger bay.  It was very large.  It's the 01 level.  CIC was on the 03 level.  To get there, you went up a staircase below the AIMD sign, turned right and down the hallway past Communications, and up another staircase to the 03 level.  We were located directly below the flight deck.  Click to embiggen. 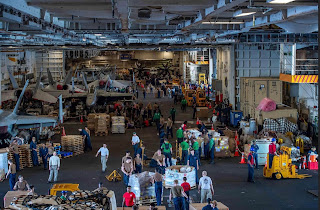 With less than 3 months until the midterms, things are really starting to pop across the country.  Biden gave a speech yesterday in which he said pretty much heading into fascism.  Some want to call this version of him Dark Brandon, I, however like Fiery Brandon.
I was quite pleased to see the White House starting to call out those Republicans shrieking about the student debt relief.  Mike Kelly from PA, almost a million $ in PPP written off.  Republicans weren't expecting this.  They thought there was no way the Democrats were going to kick them in the nuts.  Wow!  Guess who's regretting now wearing a cup?  Dumb asses.
And, of course, there is the Roe v Wade issue.  In their attempt to lock in the Cracker Jack Crazy Christian vote, legislators in the very red states passed extreme laws against abortion, and now their 'oh shit,' moment is happening.  Who do these stringent hurt the most?  The working classes.  Paraphrasing Ruth Bader Ginsberg, "any woman with means, will always find a way to get an abortion."  Now tell me, why would the very male Republican party think about women at all.