So, I went to bed early last evening.  As a result, I got up earlier than my usual 0600.  I have no problem with that.  More time to get things accomplished before I head off to work.

And, speaking of work, I volunteered to put in some extra time this week.  Rather than have Tuesday and Wednesday off, I will be working 5 hours each day.  As I'd said, one of our associates gave his notice - well, he's gone.  Yesterday, when I got to work, I discovered that another associate had a bit of an accident.  He fell off a roof... and lived.  He sent pictures.  I didn't ask to see them.  From what I've been told, his face is all stitched together, and he now has numerous pins in his shoulder.  He told management that he would be back to work on 8/18.  I doubt if that date is any good.  Maybe September 18, and even then, he'll still probably have his arm in a cast.

Otherwise, yesterday was slow, not a day of accomplishments.  John Fetterman did Tweet out this pic of one woman's opinion of Dr. Oz.  Notice the finger.  He's sort of falling down in the polls. 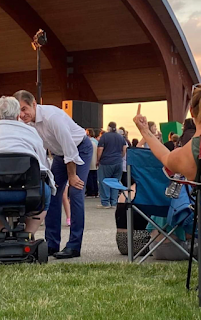 Of course, the Senate voted yesterday on the Inflation Reduction Act.  Filibuster proof.  Republicans are pissed because the Democrats are doing something that doesn't include tax breaks to corporations and to the wealthy.  They're terrified.  The Roe v Wade decision put them on a very slippery slope.  They're losing traction everywhere. Can't maintain their balance and keep falling down.  A little over a week after Kansans voted against a constitutional amendment outlawing abortion, the Indiana legislator approved an extremely stringent anti-abortion bill because...  These men are running down a hardwood staircase in their stocking feet.
And I saw that the alumni of Rhodes College in Tennessee have have sent a signed petition to college leadership asking that Amy Cony Boney's name be stricken from the Honor Roll.  This is because Amy's "adherence to an originalist interpretive methodology of constitutional textual analysis appears to be at odds with the statements she made" during her Senate confirmation.  In other words, she lied.  She is one of the reasons the reputation of the Supreme Court has fallen so low in the court of public opinion,