I was the only specialist at the flooring desk yesterday.  Business was sporadic.  I set up 2 measures, but one woman never paid for hers, so that didn't count.  While I did sell some laminate flooring, mostly I sat and talked to other associates.

A wall clock that I had in the kitchen died yesterday morning.  Even though my dad had received it as a retirement present, it had very little sentimental value.  I will need to buy a replacement.  Perhaps a cuckoo clock.  Something that makes noise.  Nothing battery operated.  I want a clock with a movement which needs to be wound.

A summer cold might be in my future.  So far this morning, I've coughed 3 times and my nose has begun to dribble... but just a little.  If it is a cold, it should be gone by tomorrow.  We shall have to wait and see.

My new controller arrived yesterday before I went to work.  Nice, eh?  I can't wait to pair this baby with my Xbox Series X. 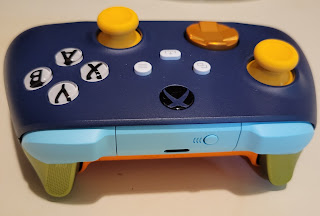 I was talking last evening with a friend who's rather alarmed that Justice Alito seems to not only believe he's in charge of the Supreme Court, but that he's been chosen by God to make America Christian again.  What a dolt.  His comment about helping young Americans to find religion again outlines his focus completely.  I don't doubt for a second that he's a man who's thinking now is a really good time for another Inquisition.  For Alito, the path to success is by oppressing everything he sees as standing in the way of his dream.  He is also the type of fanatic who would have no problem sending those same young Americans to their deaths in order to garner the victory he craves.  He will not succeed.  He is flawed.  He doesn't understand that there will always be religious beliefs, however, they may not be the beliefs he cherishes so deeply.  History has proved this point over and over again, no matter where you live in the world.  Unfortunately, because Alito is a man who needs to cherry-pick his history, he will never see the truth.