Well, happy Sunday, slow day.  I don't work today, so it is almost truly going to be a day of rest... hey, who am I kidding.  Later this morning there will be a mowing of the lawn, and the loading of the washer (at least 3 times), and the emptying of the dryer.  I might even get a ride in, if I don't get bogged down.  Sundays are a good day for bogging down, in case you didn't know.

I was planning on watching the last episode of Star Trek's Strange Journeys last evening, but Paramount + needs an update and my TV was not being very receptive.  Instead, I watched the first episode of Moonhaven on AMC +, which I thoroughly enjoyed.  Since AMC + is a subscription service, as is Paramount +, after the season finale of Star Trek, I'll probably drop the Paramount and subscribe to AMC.  Then, probably in December, I'll flip back, cancelling the subscription to AMC and resubscribing to Paramount.  There is no reason I should be paying for a service I'm not using.

For those who don't know, the Tour de France is cycling, and sprinting, and climbing through the French countryside.  During previous years I watched as many stages as possible.  This year?  Well, NBC Sports, which carries the race merged with its parent company and is now part of Peacock TV, the NBC subscription service.  Without cable, I can only subscribe to Peacock TV through my Xbox (Microsoft).   Well, that isn't going to happen anytime soon.  I don't want to have 3 different pieces of electronic gear turned on to watch one network.  Life needs to be more simple, less complicated.

As I was taking some garbage out this morning, I saw a black cat staring at me from the top of the hill behind my house.  I had a black cat named Kiki a long time ago.  Could this be her ghost? 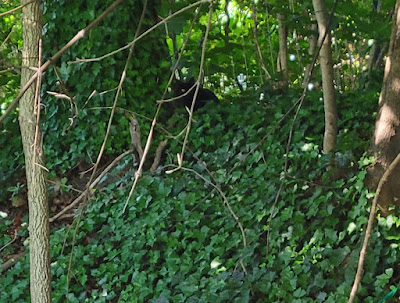 There's a lot of chatter going on about Biden's age.  Is he too old?  I think so.  But then I also think Nancy Pelosi is too old, as is Diane Feinstein (way too old), and that moral degenerate Mitch McConnell.  Your brain, like your body, changes through the years.  Older brains are not as resilient.  I say this as someone who is as someone who is aging.  This does not mean I'm less creative, I do, however, think I'm directing my creativity much better than when I was younger.  I am quicker to ponder taking action rather than simply jumping into the fray. This is not a drawback in my personal life, however there is a great difference between managing my life and managing the country.  Older people tend to be more hardened in their ways, less open to compromise.  In case you haven't noticed, I am very opinionated.  Someone needs to tell Uncle Joe there is nothing wrong with being a transitional president.  He will be better accepted and respected in the long run.