It's in the stars

And the weekend has arrived.  Today's weather?  Sunny, little if any chance of rain, and I get to go work.

Yesterday I had been going to mow the lawn.  Didn't happen.  Drizzles all day.  Every time the dogs came back into the house, they were raindrop fresh.  They don't mind going outside if it's only showers.  Steady rain, however?  Nope.  Ain't gonna happen.

Lady GaGa is bringing her Chromatica tour to Hershey, 13 miles away.  I will admit to having a little morbid curiosity, and so asked a couple of friends if there was any interest.  Nope.  Ticket pricing is high, starting at $290 for seats on the side in the Hershey Stadium.  Yes, Hershey has a stadium.  That's where I saw Paul McCartney.  U2 played there.  It's big.  Anyway, I watched some videos of her tour on YouTube and it's not so much of a concert tour as it is Performance Art.  She sings Bad Romance packed into something which looks like a cocoon with only her arms sticking out.  Definitely not for me.

As many of you know, I was in the US Navy a long time ago, stationed on the aircraft carrier USS Constellation, CVA 64 (at one point the changed the designation to CV 64).  Aircraft carriers are large; think of them as small cities.  Most people can't even conceive of something this big.  When we were on a WestPac cruise, it was not unusual for there to be over 4000 sailors on board.  Here's a picture of the flight deck.  You can tell we were not involved in flight ops because the planes are parked and there some dude walking across the deck wearing a pair of skimpy, white shorts. 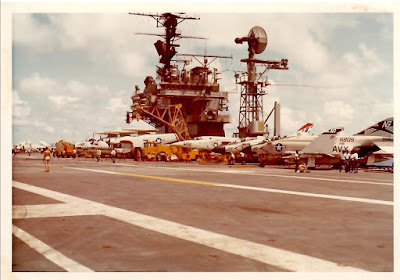 And, of course, the Republicans keeps rubbing themselves in shit because they believe it makes them more attractive to voters.  Take their voting against PACT, the legislation meant to provide medical help to Veterans.  While the vote was still ongoing, several Republican senators gathered and, knowing they'd screwed over Veterans, congratulated each other.  Ted Cruz even fist-bumped another senator. which is pretty much the same thing as giving him a 'high-five.'
This video has over 1 million views on social media.  Rubbing yourself in shit is not going to win you votes in November.