Okay, so this is the 4th of July weekend.  Last night one of my neighbors fired off a single firecracker.  Someone is a little overanxious.  I like fireworks, I just hate dealing with the traffic in order to get to a place where I can see them.  Oddly enough, I can kind of see them from my attic window, of course that would mean standing in a unairconditioned storage room where the temp can be 20 to 30 higher than outside.  While I enjoy fireworks, I don't enjoy them that much.

Yesterday was hot.  Forecasters were predicting a likelihood of rain.  Didn't happen.  Today's they say we have a 55% chance of experiencing some form of precipitation.  I'm going to water the garden because that % is really nothing more than a medium good guess.   Temps are fine.  90 (F) is not bad.  We are in summer.  I'd rather have that then temps in the triple digits.

I froze another 4 quarts of peaches yesterday. This is yummy, tasty stored away for the winter. 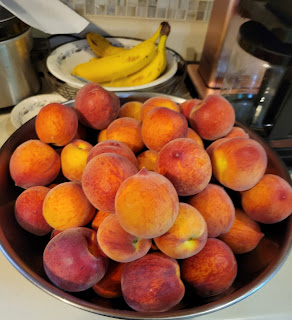 One of the things that amazes me about people is that so many seem to have long term memory problems.  I always thought there were little gray cells which specialized in documenting and possibly even categorizing things that happened for future reference.  Here's an example.  When I hear people say that Trump is responsible for the greatest economy the country has ever seen, I wonder how they could have so easily forgotten that the Republicans, under George W, also voted for big tax breaks for corporations, aka Trickle Down economics.  The economy flourished.  The stock market boomed.  Because Wall Street was going like gangbusters, the GOP started throwing out suggestions on how Americans could be moved from Social Security to something similar to a national 401K program.  There was talk, not only about how this was going to be managed, but who might manage the accounts, surely not a government agency; no one would make any money if that happened.  People don't remember this.  They do, however, remember Bush's version of Trickle Down economics failing.  Corporations began laying off people who had gotten mortgages they couldn't afford, mostly those without a fixed interest rate, and the housing market began collapsing, leading to the Great Recession.   Based on Trickle Down economics, Trump's great economy was doomed from the start.  Perhaps a more important question might be: did he know this, and is that why he wanted people to die from Covid to brace up an economy that had failure written all over it?