In a heart beat

Yesterday was fun.  Lunch with a friend in York.  Good Conversation.  Okay food at the Imperial Chinese Buffet topped off with a chocolate chip cookie dough Blizzard at Dairy Queen.  So many fat-filled calories.  People like to ask which one of my lead characters I'm most like, the truth is neither, they're fictional.  While I do tend to eat healthy, like Max, I have no fear of 'Fluffy Foods' as he does and will suck down a Blizzard rather than consider some thinly sliced kiwi.

Weather wise, the temps did not hit the predicted 99 (F) yesterday, 95 (F) was the highest they went.  Today, we're not supposed to get out of the high 80's (F), though there is a 95% chance of rain.  Outside, the skies are overcast and it's humid, though so far, the rain appears to be moving north of us.

The heart rate monitor arrived last evening. I haven't sync'd it yet with my phone, my watch, or my bike, but that will happen very, very soon... wait a second... there, it's done.  Now, wasn't that easy.  I snapped a shot of it, and no, in case any of you are wondering, I didn't order it because it's a Pro version of the one I used to own, or because it's chartreuse. 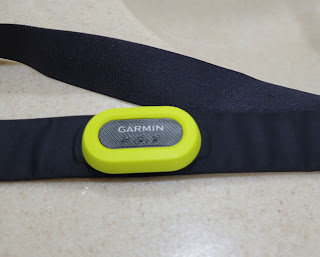 There was some sort of Cracker Jack Crazy event down in Florida this past weekend which took the GOP up to a new level of Crazy.  If you were hungry for extremist rhetoric, the speakers served up a cornucopia of fascism and hate.  An example:  paraphrasing Matt Gaetz: the only women pushing for abortion rights are fat, and ugly, and will never get pregnant and so will never need one.  The crowd cheered at his repugnancy.  Marjorie Taylor Greene claimed we are a Christian Nationalist nation, (or maybe it was Nationalist Christian, not that it matters), and she, too was cheered.  Outside the venue, there was at least one Nazi flag, and Confederate flags and Ronnie DeSantis said nothing, though there are a lot of comments on social media how, when he was speaking, he kept shifting his stance from one foot to the other.  Maybe we should all begin calling him Shifty DeSantis.
Anyway, the fact that by way of their extremist rhetoric these speakers might in fact be encouraging violence is disturbing.  Don't for a second think they care about this, they don't.  America isn't being wowed by them, rather America is stepping back in disgust.  These Crazies do not care.  They don't understand that whatever happens will be on them, and history will not be kind to them.