MAGA world has a bad day in Georgia

Well let's all say 'hello' to Mittwoch, or Wednesday as the English say.  We are in the middle of the week.  Outside, the skies are cloudy.  We have 40% chance of rain today.  Rather than gamble of a stray shower or two, or a thunderstorm which will drop much less rain than needed, I'm going to water my little garden.

Yesterday was one of those ho-hum, why not spend a few hours being a slug, kind of days.  I did get my haircut in the morning.  This was the second time I'd had this barber and she is a rambler, whatever subject managing to flit into her head becomes the topic of conversation.  Really, all I want my barbers to do is cut my hair as quickly and as decently as possible.  I'm not there for the idle chit-chat.

I was going to go for a bike ride... and didn't.  I packed in a lot of garbage food on the Fourth, so I'm thinking my lack of energy had more to do with the slow burn of the carbs working through my system.

I was surprised to find that one of my rose buses is blooming!  They are like a little bouquet. 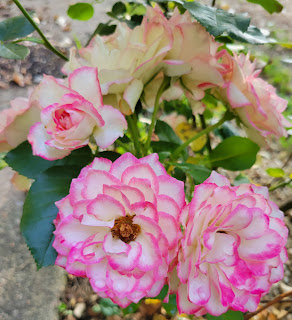 There was an interesting read in the Five ThirtyEight newsletter this morning.  The premise seems to be that the working class swung to the Republican party and Trump 5 years ago for a number of reasons, but mostly because Republicans are the party of white voters.  This idea was put forth by Rep. Jim Banks, from Indian.  Race and Culture, he says, are what now define the Republicans and that Economics now have nothing to do with it.  Banks also says he believes this shift is permanent.  If Mr. Banks, a Republican, is correct, then he needs to start telling the rest of his party that it's not about the Economy.
And for those who missed it, Lindsey (aka Pittypat) Graham was subpoenaed by the Fulton County Grand Jury.  I'm betting it too Miss Pittypat all of 2 seconds to reach for her poppers smelling salts.  Supposedly this is in reference to his asking Raffensberger to throw out thousands of mail-in ballots.  Giuliani was also invited.  My, isn't that man popular?  He seems to be getting one of these invitations every time he turns around.  Also on the guest list was Cleta Mitchell.  There is so much hatred in that old, white woman for minorities.  I've been saying for some time, the January 6 hearings will have a big effect on the November midterms.  We all need to turn to Georgia if we want to see Trump's ass fried.