So, I received my 2nd shingles vaccination yesterday.  My shoulder was a little stiff.  I also pulled the blankets tight around me while sleeping because I was cold.  And this morning?  I'm a bit tired, feeling like I should lay down and take a nap.  I may do that after this gets posted.

I use my Garmin Fenix Pro 6 to track my sleep.  This morning it said I had a fairly decent night's sleep.  It evidently missed the part at 0105 when the dogs needed to go potty.  We had a slow drizzle as I opened the door to let them out, but no sooner were they halfway across the veranda when the heavens opened.  Hell.  In 2 seconds it went from a light drizzle to a heavy downpour.  They were not happy.  While they love the drying off process, they detest getting rained on.  And I had to dry them thoroughly, the last thing I wanted was we dog on the bed.

There's a movie in store for tonight, however we're going to a different theater.  For some reason, AMC has started showing some of their movies with English subtitles.  Now, I don't mind subtitles when I'm watching a foreign film, but they are totally unnecessary when I speak the language.  AMC is doing this because of the tens of millions of deaf people who don't go to the movies because they can't hear well enough.  Translation: they're trying to get more ticket buyers in their seats.  What it will do is send people to the theaters where the open caption films aren't playing.  Tell me, how many people want to be distracted by subtitles during the latest Spiderman movie.  If you're not hearing impaired, do you really want to sit through this? 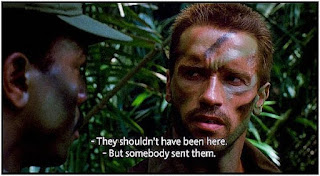 I follow Adam Kitzinger on Twitter, mostly because he understands that most conservatives are dumbasses, but also, now and then Adam is bit of a smartass, which is fine with me.  Take yesterday when he corrected an angry Trumper by telling him "It's Rino, not Rhino, there's no H."