Well, it's Monday morning.  I work this afternoon.  Six full hours, though I get a break.  I made a chorizo and pepper dish yesterday, that will be my lunch.

My department has not been busy.   We've had several customers, I ended the week with 3 measures, but this time of year flooring sales are always slow.  I don't mind.  Covid is moving through the store.  Three of our cashiers are out, as is one of our flooring specialists.  Interesting.  Because I'm part-time I wasn't around him that much.  He had been vaccinated back in early March.  Antibodies don't hang around forever, for those who don't know; this is the second go round for one of the cashiers.

Terrible storms out in the mid-west.  I feel bad for those people.  Many lost loved ones and even more lost everything they owned.  You can still be living and have your life wiped completely away.  What really irked me was Rand Paul, who has voted against hurricane relief multiple times, was so quick on the phone to Biden asking for help.  He is one selfish sack of shit.

On brighter side, I still have roses blooming... in December.  Took a pick of this cutie, a yellow climber, outside my front door. 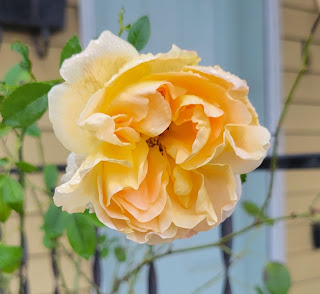 We owe Gavin Newsome a big tip of the hat.  With his decision to use the same legislative tactics Texas legislators used to go after abortion providers for gun control in California, he has stuck his fingers into the eyes of those political hacks sitting on the Supreme Court. Yep, that's right, Amy Coney Boney, and Sammy Alito, and Clarence ( I want to be white) Thomas, as well as Beer Belly Kavanaugh, set a precedent when they allowed the Texas law to stand.  In California the target might well be gun manufacturers, in Ohio?  Perhaps Big Pharma... or maybe pharmacists, that would be sweet, wouldn't it?  Go after the guy who sold the pills your kid used to overdose? Yep, those selfishly conservative dolts on the Court have shown us the way.  And, since most of them are overly zealous in their Christian beliefs, believing they are doing God's will, I'm sure they will understand this is exactly what God wants.  Hey, some smart legislators may even decide to go after Evangelical Preachers.