Well, I woke up to a drizzly, wizzly day outside and tiny rain drops are hanging from the branches of my river birch. 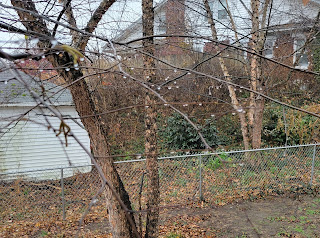 And since we're not on the sunny side of the street, I do have to work today... for a full 6 hours.  I'm thinking the store might not be too busy.  Though, I did talk to a Slovakian couple on Thursday who might be back in today to set up a measure.  They were nice; a little surprised by the cost of the carpet they chose, but then they went very, very expensive.  If they come back, I'll try to get them into something less expensive.
I've been thinking about the religious hypocrisy of anti-vaxxers.  You know who I'm talking about, those who seek a religious exemption so as to avoided being vaccinated.  They do seem to drop their religious objections rather fast once they've been diagnosed.  Sure, there are those who turn to Ivermectin, which was developed with minimal science, but when they get seriously ill they turn to the medicines developed by science.  Or, in some cases, they will pray first and then turn to science, going so far as to pray for God to let the science heal them.  Hypocrisy, yes?  Of course.  I know unvaccinated people like this.  My personal belief is that individuals who object to getting inoculated on religious grounds should rely totally on their beliefs to save them.  But then we all know that in their heart of hearts, these people are phony as hell.