On the last day of my staycation, I plan to do laundry.  I am an excitable one, aren't I?  Not having to go to work, I've spent most of the past 7 days wearing sweats.  Comfy, eh?  That's the idea.  I had planned on getting more running and cycling in... well, they didn't happen as much as I had hoped.  Keep in mind, flexibility is essential for survival.  Things narrow when you strictly follow a regime excluding chance or choice.  I know people who are rigid and unbending and wonder how they can live a life so void of opportunity.

Anyway, I don't know if Maddie's entry yesterday on scrotox influenced me or not, but yesterday afternoon I made meatballs. 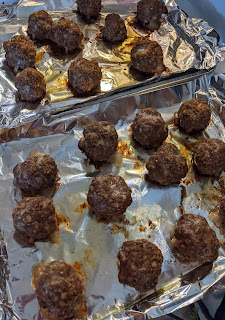 I've also spend quite a bit of time working on the final draft of The Body in the Loch.  I like to think my books are a cross between Hitchcock an Christie.  This one is a bit different, however, more like Hitchcock turns Downton Abbey into a thriller.
And, of course, I have been thinking about the next book.  Right off the bat there are certain things I need to exclude:  water, snakes, towers, museums, ghost towns... oh, and tango dancers.  I might go artsy, with a touch of art deco.  One of the titles flitting around in my head is The Body in Repose, sort of like a still life painting... with a little murder.
The impeachment is in the process of wrapping up.  Trumps idiot defense team took all of 3 hours to lie.  Either today or tomorrow the Senate will vote on his guilt or innocense.  Most think they already know the outcome.  During this trial we've seen Republican Senators doodle, and dawdle, and even disappear from time to time.  These Republicans believe many of America's voters have a short term memory, that by the time the 2022 election rolls around they will have forgotten January 6.  They really don't give Americans much credit, do they?  Niki Haley, however, is breaking ranks.  She understands that the far right, the MAGA heads, will never vote for a woman, so she's setting her sights on all those dissatisfied, moderate Republicans.  Breaking with Trump will give her some advantage, however, her socially conservative background is a big hindrance since American now realizes that without Social Conservatives, there would never have been a Trump in the White House.