Watch out for that hole

Yesterday was quiet.  I went for run / walk which I messed up: 15 minute fast walk, followed by the 31 minute 5k training.  However, because I just paused my Garmin rather then stop it completely, the two times were added together.  The end result was that it looks like I took almost 24 minutes to cover one mile.  Ouch.

My left shoulder's sore.  I think I strained it while lifting a case of 12" x 24" tile too high to put on the shelf.  Yes, I also work with tile and sometimes you need to lift the cases almost 5 feet off the floor.  Or, possibly, this just might be a sign of old age.  There's no getting around the fact that we do get aches and pains as we get older.  It's how we deal with them that's important.

I'm scheduled to work for the next 2 days.  Yippee.  They've done a change on how our personal sales numbers are reported.  New fiscal year, you know?  Changes always happen then.  Where as before our sales were compared to other specialists in the district, now it appears they've given us all a goal to strive for.  So far we've received no communication as to whether this goal is just weekly, or cumulative.  I will admit to being a bit surprised at how high the goal was for this time of year, and if it is cumulative, are we all going to end up going deeper and deeper into the hole? 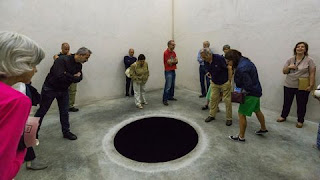 And what about those spineless Republicans?  They're running head first towards their own hole.  How are they doing this?  Secret vote on whether to keep Cheney in her leadership position, voice vote on Marjorie Taylor Green.  Secret votes are honest, voice votes are meant to please their base.  The problem here is that they're desperately trying to hold onto their base.  And, like most stupid people, they see the hole in front of them, however they can't keep themselves from falling in.  You see they look at the total votes Trump got in 2020 and never ask themselves why, they just see that total figure.  Over the past 40 years, the winning party has lost seats in Congress.  They see his total number of votes and believe this is going to happen again in 2022.  They totally ignore the fact that he created an insurrection and that people died.  That fact has already fallen into the hole.  Moderate Republicans are angry, American's are furious, and those facts have also fallen deeply into the hole.  All they understand is that 74 million people voted for Trump.  This is why they're going to fall into the hole.  Sheer stupidity.
Reuters gave us a list of every Republican who voted to investigate the 2020 election.  However, when asked if the election was stolen from Trump, only 10 said no, the rest declined to answer either 'yes' or 'no.'  Many of these names will be voted out of office.