Lily Looking out the Window

Well, we finally got the snow we've been waiting for, I'm going to guestimate the white stuff's about a foot deep; guestimate because late in the afternoon the winds began blowing.  Yes, we have drifts.  Nothing monstrous, mind you, the deepest being about 2 feet high.  Nice.  There was a break in what my grandmother would call the 'forenoon.' which lasted about 3 hours.  At that point, we had received a few inches, not really that much.  My neighbors went out and shoveled.  They evidently realized this was a 2 part storm.  They went out again last evening, and will be shoveling again this morning to take care of the drifting.  Later this morning, when the wind dies down, I will go out once.
Yesterday I printed off the first picture from my new printer.  I took it earlier in the day.  I call it Lily looking out the window.  And, in case anyone is wondering, both she and Seig went out multiple times to play in the snow.  Oh, and the printer is amazing. 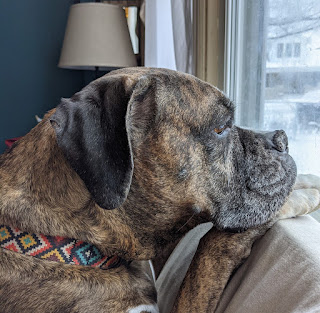 And what about those rollicking Republicans?  If they keep chewing off their feet, they're not going to have a leg to stand-on.  McConnell has called the Q Quackers a cancer.  The chinless fool needs to start naming names, of course that would mean suddenly growing a spine.  Moderate Republicans, disenfranchised from the party of Lincoln, are dropping their affiliations by the thousands.  Ronna McDaniel, the RNC president, says the moderates need to stick with the party lies.  That's not happening.  In the end, the only ones left will be Trump worshipers.  The party is devolving.  Good.  Their baseless lies are gnawing them to pieces.  I suspect it will take them years to put together anything that even remotely resembles a political organization.
Posted by Dave R at 7:04 AM