Well, it's Thursday and we have snow.  The prediction is for 'heavy' snow until around noon and then tapering off.  The odds of me going into work are slim.  It's not that I couldn't make it there this morning, it is the getting home that has me concerned.  The storm is to last until tomorrow.

I talked to Verizon yesterday.  Several odd things happened.  I went into Chat to see if things could proceed with my getting put on hold for 45 minutes to speak to a living human.  Surprisingly, 2 seconds after I initiated the Chat, Gary was answering my questions.  When I told him I wanted to eliminate Verizon from my life he gave me an 866 number to call.  Three minutes after I called, I was speaking to Melinda.  When I told her I lived close to a T-Mobile tower, and they have $50 per month internet a door opened.  Melinda offered me Internet alone, at the same speed I have now for... are you ready for this?  $39.99 a month.  You can bet your ass they are not losing money.  They are, however, losing subscribers.  I Googled it.  People are cutting their cable line left and right, at about the same speed moderate Republicans are changing their party affiliation.  Don't get me wrong.  Verizon still sucks, they're just changing their tactics.

I rode 18.72 miles yesterday!!  Took me an hour.  I was very well pleased.  A little over 100 years ago there was a ferocious battle along the Ijzer Front between the Germans and the Allies.  I rode past concrete armaments that are still standing. 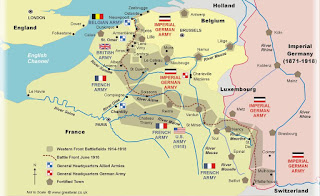 Today, since the possibilities of my calling off are increasing at about the same increments as the snow, I will probably do a joggy / runny thing on the treadmill.
Thin Skinned Rush died yesterday.  No loss.  There is one less voice of hatred in the world.
Did anybody else see the clip with Lindsey Belle whining about 2022?  He's worried.  Really.  He wants all Republicans to unify under the Cult of Trump.  Here's a link to CNN if you want to watch.  I had to chortle at the part where he says the GOP doesn't have a snowball's chance in hell without traitorous 45.  Someone should tell that girl the Republicans don't have a snowball's chance in hell... period.