What we have so far

Monday.  According to calendars, this is the first day of the week.  An accurate description of yesterday was slow.  After an initial rush in the morning, most people listened to the forecasters and stayed home... not all though.  Not all though, and in a way I was one, you see I stopped off a Giant on my way home from work and picked up an Italian sub and a bottle of red wine.  The girl at the counter complained, "they sent everybody home but me."  When I told her she was essential, she glared at me.  Nice.

So, here we are on Monday morning.  I looked at Accuweather and it looks to me as if most of this storm is slowly spinning off the Jersey coast.  They're still predicting around 8 to 10 more inches.  Just to be on the safe side, I'm going to take a personal day.  Wouldn't it be a real shitter if this was another bust of a snow storm after the way this thing has been hyped?  We will just have to wait and see.

This is what it looks like from my bedroom window. 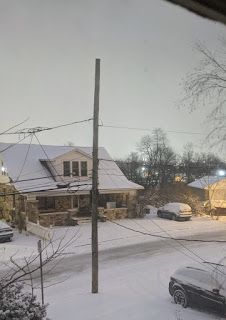 I was talking to my friend Betsy last evening, and both got a kick out of the Idiot Jerk's defense team quitting.  Evidently he wanted them to lie about election fraud.  I find it sad that over 72 million Republicans believe his lies.  Personally, I don't think reality will ever enter their world.  They are too lost in the rapture and wonderment of themselves they will never escape that fog.  Let's be honest, they've been lying about elections for decades.  They will never understand their Conservative beliefs only play well to a minority crowd, and since minority political parties rarely win, they have have to cheat and lie.  The only time there will ever be an election without fraud is when they win.  They are never going to change.