I am approaching the middle of my work week.  Yeah.  After today I'll be on that downhill slide.  Three days off!  Of course, there is always sobering reality to take the sunshiney smile from my face.  Following that 3 days, I get to work for 6. Then I'm scheduled to have 2 days off... followed by another 6 day stretch.  Groan.

Business is beginning to slow down - except for appliances.  We're running a good sale, though if you decide to purchase one that sunshiney smile will probably slide off you face when you hear how long you'll have to wait for delivery of your new washer, or dryer, or refrigerator (we don't talk about freezers).  Right now think late October or early November, unless you happen to be buying one of the extremely expensive models.  You can get one of those in about 2 weeks mostly because no one wants to spend $5000 for a refrigerator.  Damn.

In case you've were under a rock yesterday, you know by now Bobby Woodward has been releasing snippets from his upcoming book "Rage."  Of course, none of it is going to make the Idiot Jerk in the White House look... (dear, what is the correct word?)... (perhaps a phrase?)... like anything less then the evil, despotic tinfoil dictator he desperately wants to be. (Did I get it right?).  One of the mini-headlines I saw was "Kayleigh (I'm never going to lie to you) McEnamy lies he way through a very difficult press briefing."  That happy, sunshiney smile had been wiped from her face before she even opened her mouth.

Quite a number of people have been using these revelations in an attempt to evaluate the Idiot Jerk's mental reasoning.  Is he madder than a hatter?  Or just evil.  One of the most intriguing was in the Washington Post.  The idea here is that he lies just to get through a bad news cycle.  Yeah, he knew Covid was going to lead to bad press, so... he lied about it.  Yeah, that's right.  He was worried the terrible truth was going to wipe those sunshiney smiles off the faces of his loyal base.  Not only did he say nothing, he verbally attacked Governors and Mayors who attempted to slow down the spread.  This is what we've come to expect from the heart and soul of the Republican Party.

And finally, my roses are blooming... again.  Now, tell me these don't bring a sunshiney smile to your face? 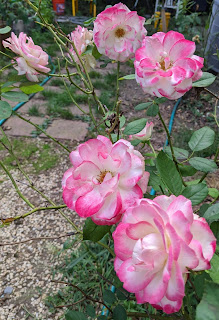